Season 10 of The Big Bang Theory premieres with a second wedding for Penny and Leonard. In real life, that is what just might be in the cards for Kaley Cuoco, who plays Penny on the show.

After her divorce from tennis pro Ryan Sweeting , that was finalized in May, she has found love again with Karl Cook, a professional equestrian she met through her penchant for horses.

At 30 years old, Cuoco has moved on and says she “can’t stop smiling” when she thinks of her new relationship. Learn more about the man who has stolen Cuoco’s heart below.

In the clip above, which is from her recent visit to The Talk, Cuoco gushed:

We met at a horse show. I finally found my horse guy. I know. It was meant to be.

The actress’ fawning over her new beau did not end there. She continued, “He’s an amazing, amazing rider and jumper, amazing equestrian and a great human. We share our passion for horses and dogs and all that and it’s been lovely, so I’m so happy.”

Cook has enjoyed a decorated career in the sport since he started at the age of eight. In an interview with Phelps Sports, he said, “I’ve been riding since I was very young and my has always had horses.”

To view the full list of his accolades on the United States Equestrian Federation Network’s site, click here. Most recently though, it details:

According to The Chronicle of the Horse, he almost quit the sport altogether in 2012. But upon reconsideration, he decided to stick with it. “It sounds silly, but I didn’t know how to do anything else,” he told the magazine. “I really didn’t want to go to school, so it was either that and be very unhappy, or really get after riding.”

Cook hails from Woodside, California, and on his FEI (Federation Equestre Internationale) profile, it states that he currently lives in San Francisco.

The pair share West Coast roots as Cuoco was born in Camarillo, California. In her divorce settlement, People reported that Cuoco got her and Sweeting’s homes in both Tarzana and Santa Barbara, California. Their home in Tarzana formerly belonged to Khloe Kardashian and Lamar Odom. It recently made headlines after Cuoco redecorated its walls with $3,450 wallpaper.

The starlet also takes weekly riding lessons at the Los Angeles Equestrian Center in Burbank, California and has been riding horses since she was a teen. “I took my first riding lesson at 15, and I’ve ridden almost every day since,” she told Self. In fact, she captioned the picture below that features her horse and Cook, with, “Not sure who I miss more.”

3. His Father’s a Billionaire

According to Forbes, Karl’s father, Scott, is worth 2.2 billion. He launched the tax software firm Intuit, which enables users to easily balance their checkbooks and small businesses pay their taxes.

A graduate of Harvard, the senior Cook serves on the boards of eBay and Procter & Gamble. Cook’s mother, Signe Ostby, also works in the tech business, having started the Software Publishing Corporation. The husband and wife team founded the Center for Brand and Product Management at the Wisconsin School of Business.

4. They’ve Been Dating for Around 6 Months

Cuoco’s first post featuring her man on Instagram came in March, so the couple has been together since the spring. Cuoco announced her separation from Sweeting last September.

As for the split, that happened after being married for only 21 months, she told CBS This Morning:

I’m not ashamed of anything that happened. I love hard and when it’s over, it’s over….I wouldn’t call it a mistake. It just is what happened in my life.

Cuoco turned 30 in November and Cook is 26. Her ex-husband, shown in the photo above, was two years younger as well.

However, the actress doesn’t always date younger men. She dated her Big Bang costar Johnny Galecki, who is 11 years her senior. They were together for two years until they split amicably in 2010. In fact, just three weeks ago, the actor, who plays her TV husband, posted this playful shot on Instagram:

Other significant others of The Big Bang Theory cast members: 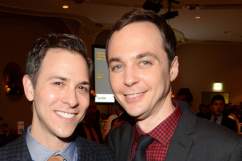