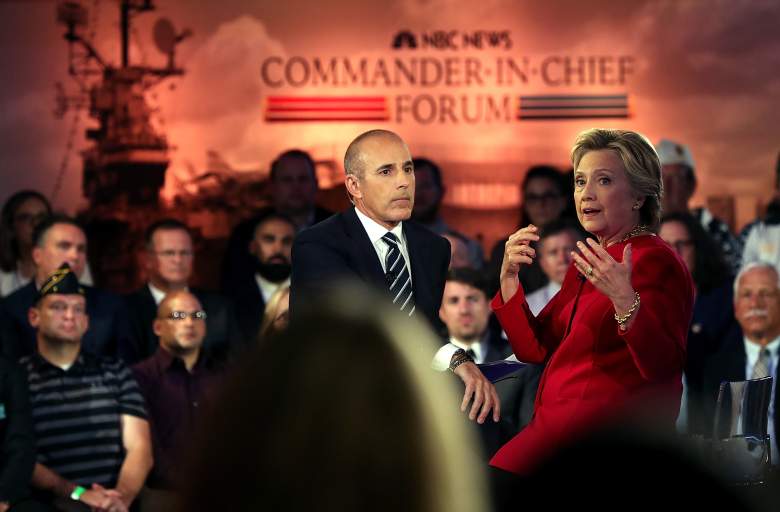 Today Show host Matt Lauer faced a wave of criticism Wednesday night following NBC’s Commander-In-Chief Forum. By and large, the reaction was that Lauer, who moderated the forum, took a much more aggressive approach with Hillary Clinton than he did with Donald Trump. Many critics felt Lauer spent too much time addressing Clinton’s email scandal, while he failed to fact-check Trump on several statements.

During the one-hour forum, Clinton and Trump appeared back-to-back as they separately addressed an audience of veterans and active military members.

During and after the forum, Twitter was flooded by people who said they felt Lauer “grilled” Clinton with tough follow-up questions, but did not hold Trump to the same standards, who was asked more open-ended questions that he often evaded. At one point #LaueringTheBar was even trending on Twitter. The rough reviews weren’t only limited to social media, Lauer also received his share of criticism from the press.

Clinton got tougher questions, but also got visibly irritated and defensive. Trump got mostly softballs. But he rode over them.

Seriously — everyone, and I mean everyone, knew this would happen. And Matt Lauer didn't have a followup planned? https://t.co/mm5ufZKjEx

What's clear after all of these softball questions to Trump: only person who's going to hold him accountable on stage has the initials HRC.

Welcome to what we were saying for 10 months before and during the primary. "Where's the follow up?!?" Never is one. https://t.co/vEOHcMFQMq

A main criticism of Lauer was that he did not challenge Trump when the Republican nominee claimed he opposed the Iraq invasion all along, which has been proven false.

Trump told the audience he stated his opposition to the war from the start, and referenced an Esquire magazine article as evidence. The article was published in 2004, a year after the war began in 2003. According to Politifact, Trump only began to publicly oppose the war after it started.

How can someone like @MLauer not set the record straight on Trump's bogus claim of being against the war in Iraq?

Matt Lauer had the opportunity to fact-check Trump live on this claim, and he didn't. Disappointing https://t.co/2su8Jj1AOA

In fact, in a 2002 interview with Howard Stern, Trump said he supported the Iraq war. In the interview, Stern asked if Trump was for the invasion, he responded: “Yeah, I guess so. I wish the first time it was done correctly.”

Buzzfeed’s Andrew Kaczynski, who re-surfaced the 2002 Stern interview, was among those who expressed disappointment in Lauer’s follow-up, or rather lack thereof.

Instead of setting the record straight, Lauer moved along to the next question, which was about Trump’s tendency to “say things that you later regret.”

"I was totally against the war in Iraq," Trump says, saying something that is not true. Matt Lauer offers no follow up.

While Lauer asked Trump about his temperament, he did not bring up some of his most contentious statements.

As CNNMoney pointed out, Lauer did not press Trump about some of his most controversial remarks, including those about Gold Star parents Khizr and Ghazala Khan and Sen. John McCain’s prisoner-of-war status.

Two topics that are fitting for a forum on military affairs, and veterans issues.

Very disappointed in @MLauer and @MSNBC – Trump insults prisoners of war and you don't bring it up? At a VETERANS forum? Shameful!

If only Trump had attacked that Gold Star family in an email, then it would be newsworthy to Lauer. https://t.co/TYMMq3qqXQ

Another aspect that drew ire was the amount of time Lauer devoted to Clinton’s use of a private email server as secretary of state. For 13 minutes of the allotted 30-minute slot, he pressed Clinton for more details on her handling of classified information, then asked if her actions were “disqualifying” to serve as commander-in-chief.

Since Lauer devoted a chunk of time to questions regarding Clinton’s private email server, it seemed to rush other crucial topics including ISIS.

When a veteran in the audience asked Clinton to explain her plan to defeat ISIS, Lauer interjected before Clinton replied.

“As briefly as you can,” he told the Democratic candidate.

It is amazing. Lauer interrupted Clinton's answers repeatedly to move on. Not once for Trump. Tough to be a woman running for President

So Matt Lauer spends forever on emails but tells Clinton to speed it up on #ISIS?
Are you serious?
#NBCNewsForum

Other critics such as Jon Favreau, the former speechwriter for President Barack Obama, felt asking Clinton about her use of a private email server was reasonable, but Trump should have been asked the same type of hard-hitting questions rather than open-ended ones.

Favreau wrote on Twitter, “I don’t blame Lauer for asking the email question. But it’s ABSURD that he started off with Trump, ‘Why should you be Commander-in-Chief?'”

I don't blame Lauer for asking the email question. But it's ABSURD that he started off with Trump, "Why should you be Commander-in-Chief?"

Some indicated they believe the backlash will increase the pressure on Lester Holt, who is scheduled to moderate the first presidential debate on September 26 at Hofstra University in New York.

It has also increased conversation surrounding how much fact-checking should be done by the moderator during the upcoming debates.

Fox’s Chris Wallace, who will moderate the final debate, has already said hat he will not fact-check candidates, stating, “I do not believe it’s my job to be a truth squad.”

What happens now: Lauer will get hell all day tomorrow, debate mods (particularly Holt) will be under lots of pressure to be hard on Trump.

All this outrage about Trump not being fact-checked during the forum? This is what @LesterHoltNBC faces at the debate 19 days from tonight.

Alright @LesterHoltNBC we're all counting on you to be tough and follow up on B.S. answers in the 1st debate. #Lauer failed spectacularly. ?

Lot of pressure on Lester Holt.

I hope @LesterHoltNBC uses @MLauer 's performance tonight as an example of what NOT to do when he moderates a debate.

Lester Holt is a respected man and journalist. Matt Lauer is not even close to being the quality journalist as Holt. https://t.co/84VmIkG22T 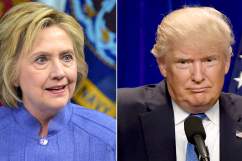 POLL: Who ‘Won’ the Commander-In-Chief Forum?