Mike Oppong is a junior football player at Doherty High School in Worcester, Massachusetts, who says he was suspended for one game after taking a knee during the National Anthem. (Twitter)

A Massachusetts high school football player says he is no longer being suspended for following in the footsteps of NFL quarterback Colin Kaepernick and taking a knee during the National Anthem.

Mike Oppong, a junior at Doherty Memorial High School in Worcester, said on Twitter that he was told by his principal and coach that he would have to sit out one game because of his protest, which took place before a game Friday night.

My coaches and principals have decided to suspend me for 1 game.

On Monday, after his story received attention from journalist Shaun King and leaders of the Black Lives Matter movement, Oppong tweeted that the suspension was lifted.

Thanks to all your love and support my suspension of 1 game has been terminated! pic.twitter.com/a8RB9c200N

Oppong was making a similar protest to that of Kaepernick, a backup quarterback for the San Francisco 49ers, who knelt during the Star-Spangled Banner before a pre-season game last month.

The pro quarterback said his protest was because he cannot support a “country that oppresses black people and people of color.”

“I am not going to stand up to show pride in a flag for a country that oppresses black people and people of color. To me, this is bigger than football and it would be selfish on my part to look the other way. There are bodies in the street and people getting paid leave and getting away with murder,” Kaepernick said.

1. Oppong Said He Took a Knee Because of the ‘Injustice That Happens to Black People Every Day, Not Just Cops Killing Black People’

Doherty's Mike Oppong took a knee on Friday in solidarity with Colin Kaepernick. Says he will be suspended for it. pic.twitter.com/Z3YendSKoq

Mike Oppong explained his decision to take a knee before Doherty Memorial’s Friday night game against Leominster in a series of messages to Worcester reporter Carl Setterlund.

“I’m standing up for the injustice that happens to black people every day, not just cops killing black people,” Oppong wrote. “We are disrespected and mistreated everywhere we go on a daily basis because of our skin color and I’m sick of it.”

He said he plans to continue the protest throughout the season.

“My teammates have been supporting me the whole way,” he said.

After his suspension was lifted, Oppong tweeted, “I just want to thank all of you guys for the support you all gave me throughout this whole situation and by God’s grace Justice was served!”

Ironic how @DohertyFootball suspends @Oppong_5 for exercising his 1st Amendment rights then locks its Twitter account. Hypocritical much? ?

On Monday, Worcester Public Schools issued a statement saying Oppong would not be punished:

Recently, athletes have displayed silent protest in support of the dialogue on race and equality that continues to evolve in every community across the nation. This weekend, a football player from Doherty Memorial High School knelt down during the National Anthem, joining the many athletes who have silently displayed their opinion.

The Doherty student did not violate any school rule when he peacefully and silently protested during the National Anthem. He exercised his Constitutional Rights without disturbing the school assembly and he is not being disciplined in any way by his actions.

Worcester Public Schools is a rich, diverse community that thrives to maintain open dialogue about the challenges that our community and our country face.

Sources told Black Sports Online, one of the first to report on the protest, that the coach’s hands were tied, and the principal made the decision to suspend Oppong.

The team is coached by Sean Mulchay and the principal is Sally Maloney. Neither have commented about the situation.

But Superintendent Maureen Binienda told the Worcester Telegram & Gazette that no suspension was ever given to Oppong, and the principal first began investigating the issue Monday morning.

“That’s against the law,” she said of a potential suspension. “There’s absolutely no discipline that’s happening with that.”

Oppong said he thinks the district is now trying to cover its tracks after the national attention his story received.

Many supporters of Oppong took to social media to call the suspension a violation of the football player’s First Amendment rights.

We support you, @Oppong_5. & your coaches & principals are on the wrong side of justice. https://t.co/Yl6nZKgG5F

We stand with you @Oppong_5!

It's not right that you have been suspended for taking a knee. pic.twitter.com/MBFX5J54gz

Much respect 2 @Oppong_5 who is sittin on the right of history. His courage & willingness 2 fight 4 justice should b celebrated not punished

suspended from playing football at his high school for exercising his constitutional rights, this is unreal https://t.co/CiDtTV8Jsx

Contest the decision they cant suspend you. Our country is oppressive we don't need our schools to follow suit https://t.co/Wdl4yHhZbR

.@Oppong_5 might get suspended for being a human rights advocate. @DohertyFootball should be ashamed. Kid is a hero https://t.co/OOFsvqYXZx

.@DohertyMemorial in MASS suspending a football player for being a good American citizen & exercising his 1A rights. https://t.co/tisL4ME9vN

I support u @Oppong_5 Keep ya head up!Just because they're older doesnt make them right & Just you are only one person doesnt make you wrong

Sarah Wunsch, deputy legal director for the ACLU in Massachusetts, told MassLive.com a suspension would have violated Oppong’s rights and state law, which prohibits students from being punished for expressing themselves freely and peacefully.

“I would suggest that other members of the team would join them. It’s really important that he’s not alone in this,” Wunsch told MassLive.com, adding the ACLU would be contacting the school. “I think they disapprove of a team member projecting that sort of image for the school. They may not like the image, or the place he did it, but he has freedom of expression.”

3. He Is a Junior Quarterback & Defensive Back at the Worcester High School

Michael Oppong is a junior quarterback and defensive back for Doherty Memorial, according to his Twitter profile.

He rushed for a touchdown during Doherty’s comeback attempt during Friday night’s game against Leominster, according to the Worcester Sentinel & Enterprise. But Oppong and the Highlanders lost the season-opener 28-20.

The newspaper report on the game and Oppong’s coach did not mention his protest after the game.

“We’re young. We were hoping we could stay in a game,” coach Sean Mulcahy told the newspaper. “Our goal was to give them everything we had, and I thought our kids did that.”

4. Oppong Has Also Received Angry Tweets About His Protest, Along With the Messages of Support

You can't tell me what my brother @Oppong_5 did was wrong. How can we live with people saying stuff like this pic.twitter.com/mlNY1XVTTx

While Oppong has received several messages of support after his protest, and calls for his suspension to be overturned, he has also received backlash on Twitter and elsewhere.

The football player, like Kaepernick and others who have made similar displays of protest during the National Anthem, has been the target of angry tweets.

“Today was NOT the day to take a stand against your injustice ideas,TODAY is about honor, remembering, the fallen…the dead,” one Twitter user wrote. ” Do you think 9/11 has a “race” involved. Did 9/11 have anything to do with cops or skin color?”

I have 100% respect for the veterans and the people who lost their lives on 9/11, this whole thing isn't about them

Some questioned the timing of his decision to protest, saying it should not have occurred near the 15th anniversary of 9/11, while others directed racist slurs at him.

“They should cut this entitled little c*nt from the team!,” another tweet read.

The school district said it has put a safety plan in place for Oppong because of the threats, and were meeting with him and his parents Monday at the high school.

“We have to treat this as a bullying situation,” school safety director Robert Pezzella told the Worcester Telegram & Gazette.

I think this means the protest is growing. pic.twitter.com/tAxjXcTxtk

Kaepernick’s National Anthem protest has spread throughout football, with players taking a knee or making another gesture of support during games across all levels of the sport, including high school and college.

Young men from Detroit Edison at Hamtramck took a knee for injustice in America on Friday night. pic.twitter.com/k5Vj9MAPNg

. @KeanuHill – a cornerback for the University of Tulsa, took a knee for American injustice yesterday. pic.twitter.com/GhtOOXNpWv

On Sunday, during the first games of the NFL season, four Miami Dolphins players took a knee, while two Patriots players and a Chiefs player raised their fists into the air. The Seattle Seahawks locked arms as a team during the Star-Spangled Banner.

The protest against American injustice in the @NFL is now 14 players strong. pic.twitter.com/sMSLMl36pj

The protest reached sports outside of football. Soccer player Megan Rapinoe, a member of the U.S. National Team and the Seattle Reign, also took a knee prior to a game.

Rapinoe told ESPN’s Julie Foudy she was disgusted by the way Kaepernick was treated after his protest.

Rapinoe: It is overtly racist. Stay in ur place black man. Just didn’t feel right to me. And quite honestly being gay, I have stood with…

Rapinoe: my hand over my heart during the national anthem & felt like I haven’t had my liberties protected, so I can absolutely sympathize..

Rapinoe: with that feeling. The very least that I can do is continue the conversation with him by kneeling for the anthem.

One of her opponents, the Washington Spirit, to play the National Anthem prior to players entering the stadium, as a way to block her from protesting.

“While we respect every individual’s right to express themselves, and believe Ms. Rapinoe to be an amazing individual with a huge heart; we respectfully disagree with her method of hijacking our organization’s event to draw attention to what is ultimately a personal—albeit worthy—cause,” team owner Bill Lynch said in a statement. 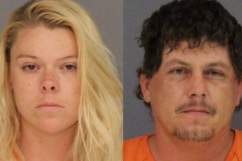 Loading more stories
wpDiscuz
26
0
Would love your thoughts, please comment.x
()
x
| Reply
A football player at Doherty Memorial High School in Worcester, Massachusetts, says he was suspended for taking a knee during the National Anthem.