Five Boston Red Sox pitchers combined to strike out 21 Tampa Bay Rays batters in nine innings in a game at Tropicana Field on Sunday, breaking the previous record of 20, which has been set five times — starting on April 29, 1986 when another Red Sox pitcher, Roger Clemens, recorded the first 20-strikeout, nine-inning game in Major League Baseball history.

But the astonishing performance by the Red Sox pitching staff will not count as a record. Why? Because the game extended into the 10th inning, and Major League Baseball counts nine-inning records only for games completed within the regulation nine innings.

The Red Sox’ final total of 23 strikeouts in 10 innings is an all-time team record for the Boston franchise that has been in existence since 1901.

The Red Sox won the game in 10 innings, 3-2. The game was won on an RBI double by David Ortiz, who drove in Dustin Pedroia from first base — with Pedroia scoring on one of the most bizarre plays at home plate baseball fans will ever see. It was the 11th straight Red Sox victory.

Somehow, someway, @15Lasershow was safe on this play. https://t.co/7g5ZabBS9l pic.twitter.com/HzjOmQ6CMK

Red Sox starter Eduardo Rodriguez and the first reliever out of the bullpen, right-hander Heath Hembree, did however combine on another strikeout record that will go down in the books as official. From the fourth inning to the seventh inning of Sunday’s game, the two pitchers fanned 11 straight batters, breaking the record of 10 set on April 22 of 1970 by a single pitcher, Tom Seaver of the New York Mets, against the San Diego Padres.

Rodriguez, a 23-year-old lefty from Venezuela, pitched the first 5 1/3 innings for Boston, allowing one run on three hits with a walk and a hit batsman. But what was remarkable about his outing was that he set down 13 Rays on strikes — including the last seven in a row that he faced and 10 of the final 11 batters before Red Sox Manager John Farrell pulled him from the game.

Farrell then brought in Hembree, a 27-year-old journeyman who Boston acquired two years ago in a trade with the San Francisco Giants.

Hembree responded by fanning all four batters he faced.

Matt Barnes recorded one strikeout in his one-third of an inning, while lefty Fernando Abad, who replaced Barnes, faced one batter, Brad Miller, who stroked a game-tying single. Joe Kelly finished the game for the Red Sox with four more strikeouts in 2 2/3 innings.

The record for most strikeouts in a game of any length was set by the Oakland A’s pitching staff on July 9, 1971, when four A’s hurlers combined over a 20-inning game to fan 26 batters in what turned out to be 1-0 win over the California Angels.

In that game, A’s starter Vida Blue fanned 17 in 11 innings, followed by Hall of Fame relief pitcher Rollie Fingers, who notched seven strikeouts over the next seven innings. A’s relievers Bob Locker and Darold Knowles finished the 20-inning epic with one inning, and one strikeout, each.

The nine-inning record set by Clemens in 1986 has been equalled four times, three by a single pitcher throwing a complete game, and once by a staff combining for 20. Most recently — this season, in fact — Max Scherzer of the Washington Nationals fanned 20 Detroit Tigers.

Boston’s Clemens equalled his own record, also pitching against the Tigers, on September 18, 1996. The Chicago Cubs’ Kerry Wood became the first pitcher other than Clemens — and the first National League pitcher — to fan 20 in nine innings when he did it against the Houston Astros on May 6, 1998.

On September 25 of 2012, five Los Angeles of Anaheim pitchers, led by 13 strikeouts from starter Zack Greinke, combined to strike out 20 Seattle Mariners hitters.

On May 9 of 2001, Hall of Famer Randy Johnson of the Arizona Diamondbacks struck out 20 batters in nine innings in a game against the Cincinnati Reds. But Johnson was not credited with tying the record because, like Sunday’s Red Sox vs. Rays game, nine innings was not enough to decide a winner. Arizona needed 11 innings to win, 4-3.

The record for most strikeouts in an extra inning game by a single pitcher is held by Tom Cheney, a Washington Senators pitcher whose career was otherwise unremarkable. Cheney whiffed 21 while pitching all 16 innings of a game against the Baltimore Orioles on September 12, 1962. 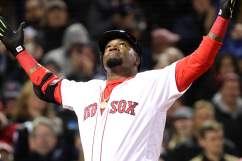 David Ortiz’s Net Worth: 5 Fast Facts You Need to Know