Video shot just outside of Aleppo, Syria, on Monday shows what experts — as well as United States officials — now say was the deliberate Russian bombing of a United Nations humanitarian aid convoy there.

Russia has denied that it was responsible for the strike, which as an attack on a humanitarian mission would be considered a war crime.

The Free Syrian Army, the main rebel group battling the regime of Syrian President Bashar al-Assad, says that 31 people died in the bombing raid, that destroyed 18 of the 31 trucks in the convoy.

Earlier reports said that 12 people had been killed in the nighttime “double tap” airstrike, but the FSA said in a statement that 12 aid workers and 19 civilians lost their lives.

In a “double tap” airstrike, an initial bombing run is followed later by a second attack, often at time when rescuers are attempting to reach the wounded from the first raid.

The videos, two separate clips showing the different portions of the bombing raid, appeared on the Facebook page of the anti-government Syrian news organization Aleppo 24 News.

Not only has Russia denied carrying out the deadly airstrike against the U.N. convoy — which was operated by the Syrian Red Crescent and killed that relief organization’s chief, Omar Baraka — the Russian Defense Ministry has suggested that the convoy may have instead been the victim of a U.S. drone strike.

Russia’s MoD spokesperson Igor Konashenkov said on Tuesday that his country has evidence that a U.S. drone was in the area of the airstrike shortly before it occurred.

“The object was in the area around the town of Urm Al-Kubra, where the convoy was a few minutes before it caught fire,” Konashenkov said in a statement quoted by the Russian state-sponsored English-language news service RT. “It left after about 30 minutes.”

At a U.N. meeting, Russian Foreign Minister Sergey Lavrov was more direct in blaming the U.S. for the aid convoy attack.

“There was another unacceptable provocation on September 19, the shelling of a humanitarian convoy near Aleppo,” Lavrov declared. “I am confident that such coincidences require serious analysis and an investigation.”

But assigning blame to the U.S. was actually the third different version of Russia’s story explaining the airstrike.

My itw on CCTV-America: "War of words between #US, #Russia following attack on #Syria-n aid convoy"https://t.co/ur32BebdGA

Initially, the Russian government simply denied that any such attack had happened at all. Instead, the Russians said, the convoy had somehow “caught fire” on its own.

When that explanation was starkly contradicted by evidence, Russia released a drone video of its own, purporting to show that the aid convoy was somehow actually a military operation because a truck towing what appeared to be large caliber artillery gun was driving alongside the aid trucks in the video.

Russian MoD's drone video of a 'truck w/ heavy mortar gun' driving next to UN aid convoy in AleppoRussian Ministry of Defense has released a drone video of a 'truck carrying heavy mortar gun' driving by UN aid convoy in Aleppo. RT LIVE rt.com/on-air Subscribe to RT! youtube.com/subscription_center?add_user=RussiaToday Like us on Facebook facebook.com/RTnews Follow us on Twitter twitter.com/RT_com Follow us on Instagram instagram.com/rt Follow us on Google+ plus.google.com/+RT Listen to us on Soundcloud:…2016-09-20T18:21:13.000Z

The discrepancies indicate, The Interpreter said, that the truck had passed the convoy and “could have been anywhere” by the time the airstrike on the humanitarian convoy commenced at 7:12 p.m. Central European Summer Time (which is also Syrian time), or 1:12 p.m. United States Eastern Daylight Time. 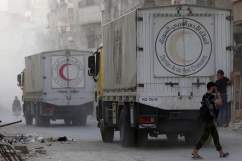