A student was shot in the lower extremities during an active shooter situation at Alpine High School in Alpine, Texas. She was identified to Heavy as Sedonah Young by another student, her ex-boyfriend, Cade Blevins. According to authorities, Young is a freshman at the school.

Friends have said she is going to be OK via Twitter.

During the response to the shooting, a federal officer was accidentally shot when another officer’s gun discharged, KWES-TV reported.

Police have not released any information about the conditions of the victims, who were both taken to local hospitals.

The school is located in west Texas along the Mexico border. The shooting is being investigated by the Brewster County Sheriff’s Office and Alpine Police.

1. The Alleged Shooter Is Dead From a Self-Inflicted Gunshot Wound

Blevins told Heavy he didn’t ever meet the girl, a freshman, and that “she was really secluded and didn’t have many friends.”

Alpine is home to about 6,000 people. There are about 1,000 students in the school district, according to its website. The district includes students from communities surrounding Alpine, according to the website.

Many are expressing shock that something so horrific could happen in a small, close-knit community. “Alpine used to be the safest place ever…Now this happens and everything will change. Huge prayers to @SedonahYoung. God is with you,” Raylee Grimmett tweeted.

A semiautomatic weapon along with ammunition were recovered from the scene, NBC reported. 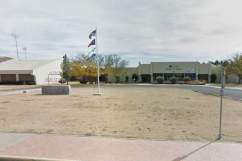 2. Friends Said Young Is OK & She Is Described as ‘Very Kind’

She’s an extremely kind girl. She’s nice to everyone she meets. She’s just an average teenage girl, with a big heart and lots of love for her friends. Plus she’s extremely pretty, and an amazing friend.

“Sedonah is at her home resting, she is in good spirits considering,” Angela Murrell posted to Facebook. “We started a make shift memorial in front of the school, if anyone else would like to put something there. Prayers for everyone affected. Thank you to the teachers who kept our students safe!!”

so blessed to know that my best friend is okay. pic.twitter.com/3XKTVyTedI

In the above Tweet, a friend who goes by the name of Rachel said she is “so blessed to know” that Young is OK.

William Butler, a senior at the the high school, told NBC News:

It was scary, I didn’t really know what was going to happen. The cops knocked on the door a little bit later and started to escort everyone out. When the police escorted us out of the classroom, there was a trail of blood going from the hallway I was going in towards the band hall.

Unbelievable. Stuff like this makes me so scared. I'm so glad that Sedonah is okay. @SedonahYoung

3. The Shooter Recently Moved to Alpine & Young Isn’t Thought to Have Been Targeted

Brewster County Sheriff Ronnie Dodson told KWES-TV he has spoken to the shooter’s grandparents. They told him she had moved to Alpine just six months ago.

The grandparents said the girl was a straight A student, and there were no indications of any problems, Dodson told the news station.

Blevins said that Young was likely “in the wrong place at the wrong time,” and happened to go into the bathroom “as the shooter prepared to attack.” The motive for the attack remains unclear. 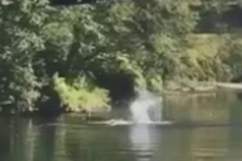 WATCH: 4-Year-old Boy Is Thrown Off a Bridge

4. The Shooting Has Called Attention to Safety in All Schools

And the state wanted to allow more guns in schools? Texas has brought this on itself https://t.co/7gjt3abnnl

This morning’s shooting has people talking about the safety of all schools in America.

“When are we going to wake up and put metal detectors in EVERY school!? It’s not just for inner city public schools. ALL of our kids need to be safe,” Ive Castro Olkowski
stated on Facebook.

Some argue that school security and administration should be armed and ready for when situations like this arise. “I guess the ‘no firearm’ policy and signs didn’t work this time. Be safe, best of luck to those involved in this situation, both law enforcement and bystanders,” Ricky Monzon posted.

5. A Neighboring College Was Also Threatened

Outside @Sul_Ross in #Alpine a few minutes ago. Pic from GM on scene. pic.twitter.com/qoXyPbrZfL

Alpine Police Department said Sul Ross State University was also under lockdown for a bomb threat, according to CBS 7.

The Brewster County Sheriff’s Office told Marfa Public Radio that a person called the school and said “y’all better leave me alone” and made threats against the college.

Police had to send resources to the college to investigate the threat.

“That’s ridiculous for someone to call in something like this when we’ve got this situation going on,” Sheriff Ronny Dodson told the Associated Press. “This community does not expect this, we don’t want this, and we can’t explain it yet.”

Loading more stories
wpDiscuz
4
0
Would love your thoughts, please comment.x
()
x
| Reply
One of the victim's from Thurday morning's school shooting in Alpine, Texas, has been identified as Sedonah Young. Young was reportedly released from the hospital after suffering a gunshot wound to a lower extremity. Read more here.