Terrence Sterling, an unarmed African-American man, was shot and killed by a Washington D.C. police officer after his motorcycle crashed into the officer’s squad car after a bachelor’s party.

Protests have been growing surrounding his September 11 death, and the city released body camera videos and announced that it could also release the officer’s name on September 27. However, the case has provoked controversy because the officer had his body camera turned off until the aftermath of the shooting, prompting a change in police policy, said The Washington Post.

Later today, we will be releasing body-work camera footage from the Terrence Sterling case.

Eyewitnesses dispute the police account of how Sterling died. The Sterling protests and the video release come on the heels of riots and protests that ignited in Charlotte, North Carolina over the death of a black man, Keith Lamont Scott, at the hands of a black officer, Brentley Vinson. However, in that case, police say Scott was armed with a gun he wouldn’t drop, which his family disputes.

The video’s release also comes after the Tulsa, Oklahoma shooting of an unarmed black man named Terence Crutcher by officer Betty Shelby, who was charged with criminal manslaughter for the shooting.

1. Sterling Was on a Motorcyle When Shot & Police Say He Was Driving ‘Recklessly’

According to The Washington Post, “police said he crashed his motorcycle into a cruiser.”

The police news release on the shooting reads: “At approximately 4:30 a.m., an officer observed a motorcyclist driving recklessly near the 1700 block of U Street, Northwest. A few minutes later, another MPD officer observed a motorcycle matching the same description near 3rd Street and M Street, Northwest. When the officer was exiting the passenger side of his marked police cruiser to stop the driver, the motorcyclist intentionally drove into the passenger door and the officer fired his service weapon.”

2. Witnesses Dispute the Police Account of the Shooting, Reports Say

According to NBC 4 Washington, several witnesses disagree with the police account of how Sterling died.

They said “the collision was unavoidable and Sterling did not intentionally strike the cruiser,” indicated the television station, adding, “They also said the officer was not trying to get out of his car, but instead rolled his window down and shot Sterling from inside the car after the crash.”

People on Twitter have been raising questions about the shooting using the hashtag #TerrenceSterling.

We need transparency on #TerrenceSterling, @MayorBowser. Why were police cameras off? Why did they use deadly force for a bike accident?

If he was really trying to "flee the scene" why wouldn't you pursue a chase? Why is your first response to shoot???
#TerrenceSterling

Haven't heard of #TerrenceSterling ? The police were SITTING IN THEIR CAR when they shot him point blank. We demand justice.

The officer was placed on administrative leave and was not seriously injured, the police news release said. WJLA says the shooting “is still under review by the Metropolitan Police Department and the U.S. Attorney’s Office.”

3. Sterling Had Just Left a Bachelor’s Party When Shot & Colin Kaepernick Has Spoken out About the Shooting

New-More protests planned for Tuesday in police involved shooting of #TerrenceSterling. Demonstrators to walk to MPD HQ from 3rd and M. pic.twitter.com/wT7Bz2CifB

According to Fox 5 DC, Sterling was a VAC technician who had just left a bachelor’s party on the night the shooting occurred.

The television station reported that Sterling was heading home. Sterling lived in Fort Washington, Maryland, according to NBC 4 Washington.

According to WJLA, Sterling’s cousin described him as “a kind…help anybody person,” who was “just so excited about life and his career.”

4. Protesters Have Demanded More Transparency in the Shooting Death

5. Controversy Erupted Because the Officer’s Body Camera Was Switched off When the Shooting Occurred

so sad to see you go like this ? RIP #TerrenceSterling ?? you will be missed. Justice is coming ❤️ pic.twitter.com/6DOl9yz3fm

The city was preparing September 27 to release the video footage that does exist. However, people are upset because the officer’s body camera was switched off when the shooting started. Cameras captured the aftermath of the shooting only, said Atlanta Black Star.

The video does not answer all questions. The incident is still under review by MPD & the US Attorney's Office.

See the video from the aftermath of Sterling’s shooting here. Warning, the video is graphic: 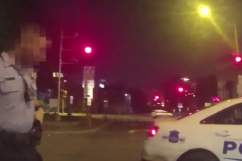