Thomas Gallagher was the engineer of the NJ Transit train. (Facebook)

The engineer of the New Jersey Transit train that crashed into the Hoboken station Thursday morning during rush hour, killing a woman, injuring more than 100 other commuters and heavily damaging the train and building, was among those critically injured.

Thomas “Tommy” Gallagher, 48, was identified by WABC-TV as the engineer.

He was found slumped over the controls of the train after the crash, the Associated Press reports.

Fabiola Bittar de Kroon, 34, of Hoboken, has been identified as the woman killed in the crash. At least two others remain in critical condition with life-threatening injuries, officials say.

The cause of the crash remains under investigation.

1. Gallagher Was Released From the Hospital & Is Cooperating With Authorities

A passenger said he was “completely bloodied,” when he was taken out of the train, according to the New York Daily News.

But he had been released from the hospital by Thursday night, ABC reporter Josh Margolin reports.

He is cooperating with authorities as they investigate what caused the train to crash into the station. He has not yet commented publicly about what happened.

The NTSB said they have not yet interviewed him.

2. Gallagher Does Not Have Any Past Infractions or a History of Medical Issues, Sources Told NBC

There were no “red flags” about Gallagher, NBC New York reports.

Gallagher’s father told the news station his son has worked for NJ Transit for 19 years and has also served as a station master, a part-time track worker and an accident investigator.

He said his son is healthy and is a dedicated worker who does not call in sick.

According to his Linkedin profile, Gallagher is a loco engineer. He graduated from Farleigh Dickinson University in 1990.

Gallagher is married and has two daughters. They left their home with a police escort Thursday evening, WABC-TV reports.

“Just a fine, fine family. Great next door neighbors, wonderful kids, very caring people about others. It’s just tragic, in terms of what they’re going through, or what they’re going to be going through. But just very nice, and when I heard it, or actually saw you come up, and heard that was the case, I could not believe it,” Tom Jones, the engineer’s neighbor, told the news station.

3. Survivors Said the Train ‘Didn’t Stop’ as It Barreled Into the Station

Survivors of the crash said the train was traveling at a high rate of speed when it entered the Hoboken station.

“I thought we were going to die,” passenger Alexis Valle told the New York Daily News. “I didn’t think we were going to get out … the train didn’t stop. It kind of picked up speed and then crashed into the building.”

There were more than 200 people on the train when it crashed through the bumper at the end of the tracks, which is made of concrete and steel.

“All of a sudden, there was an abrupt stop and a big jolt that threw people out of their seats,” passenger Ross Bauer told the Associated Press. “The lights went out, and we heard a loud crashing noise — like an explosion — that turned out to be the roof of the terminal. I heard panicked screams, and everyone was stunned.”

NJ Transit’s trains are not fully equipped with positive train control, which is a safety system that can prevent accidents by automatically slowing or stopping trains when they are going too fast, the Associated Press reports.

The government has mandated that system be put into place, but the deadline to do so has been extended several times, and is now set for the end of 2018. 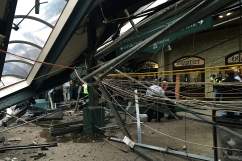 4. The Train Appeared to be Traveling About 30 MPH Where It Should Have Been Stopped, a NJ Transit Employee Says

Governor Chris Christie said at a press conference the train “came in at much too high a rate of speed. And the question is why is that.”

Mike Larson, who works as a machinist for NJ Transit and was 30 feet away from the train when it arrived, told The Journal News the train appeared to be traveling about 30 mph at a point where it should have been stopped. The train should not be traveling faster than 10 mph as it approaches the station, officials have said.

“The impact sounded like a bomb-like explosion,” Larson told the newspaper. “I really don’t know why he came in so quickly. I can only speculate it was a medical condition like a heart attack or something.”

The NTSB and other investigators are working to determine the cause of the crash.

Christie said it appears to have been a “tragic accident.”

5. De Kroon Was Struck by Debris on the Platform of the Station

Fabiola Bittar de Kroon, the 34-year-old Hoboken woman killed in the crash, was struck by debris while standing on the platform, officials say.

Most of the other commuters injured in the crash were on the train, Governor Chris Christie said.

Read more about de Kroon at the link below: 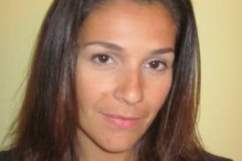 Loading more stories
wpDiscuz
4
0
Would love your thoughts, please comment.x
()
x
| Reply
Thomas Gallagher, 48, has been identified as the engineer of the NJ Transit train that crashed in Hoboken. Gallagher was critically injured.