31-year-old Tiziana Cantone was found dead Tuesday from hanging herself after a 2015 sex tape she was featured in went viral.

Many have compared the situation to Kim Kardashian, who also made a sex tape that went viral. However, Italy is said to have a much different outlook on sex than America. Author Roberto Saviano said Italy has a "morbid" relationship with sex and the rejection she felt from the public after the tape went viral stemmed from those feelings. "I grieve for Tiziana, who killed herself because she was a woman in a country where uninhibited and playful sex is still the worst of sins," Saviano said on Twitter. Click through the gallery to view more images of Cantone. (Instagram/tizianacantonereal) 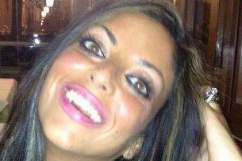 Read More
Italy, Photos
Tiziana Cantone was found dead after hanging herself following a sex tape she was featured in that went viral. Click here to see photos of the beauty.