Tyler Barefield, 35, was arrested Thursday and charged in connection with a bizarre case involving the bodies of two men found crushed inside a car in an Arkansas junkyard. The suspect is also known as Joseph Barefield, according to KTHV-TV in Little Rock.

1. He’s Charged in the Deaths Of Aaron Brock and Beau Dewitt

Pope Co Sheriffs Dept says the bodies found yesterday were Aaron Brock & Beau Dewitt and they say it was homicide. No arrests yet #ARnews pic.twitter.com/fVx0u9BRI5

Aaron Brock and Beau Dewitt, both 22 years old, went missing on Friday, September 16. On Tuesday the bodies of the two young men were discovered stuffed into the trunk of a car that had been crushed at the U-Pull-It Auto Parts salvage yard in Russellville, Arkansas. The deaths were immediately ruled homicides.

The two young men were best friends, according to Dewitt’s mother Kim Cooksey-DeWitt, 57, who said that they bonded over their mutual love of cars. Her son Beau was set to become a father on Monday, and he planned to fix up a car he had recently purchased before his girlfriend gave birth.

“That’s all they ever did, was work on their cars,” the mom told The Arkansas Democrat-Gazette. “They didn’t have very many friends, it was just them two together. But they were dropped off at midnight outside of that junkyard. And then nobody ever heard from them again.”

She said that her son and Brock visited the U-Pull-It salvage yard during the day of September 16 to purchase shock absorbers and a window for the car, but had to leave before taking the parts.

They returned to the salvage yard at midnight where their girlfriends dropped them off. But when the two women returned to pick up their boyfriends, Brock and Dewitt were nowhere to be found.

Police said that Brock and Dewitt planned to steal the auto parts — both had theft convictions on their records — but Dewitt’s mother said they fully intended to go back there and pay for the parts the following day.

Both victims lived in Dardanelle, less than five miles south of Rusellville.

On Thursday, police searched Barefield’s Castlegate Loop home in Russellville, according to KATV News, whose reports said that police investigators were accompanied by a locksmith, and “a drilling noise” was heard from inside the home as police scoured the place.

2. Security Footage Shows Barefield With an AR-15 Rifle the Night of the Murders

U-Pull-It salvage yard in Russellville, Arkansas, where the bodies were found (Yelp/U-Pull-It)

Barefield, who police said is one of three men who co-own the salvage yard, was seen on security footage wearing camouflage clothing at about 9 p.m. when he was caught on tape monitoring the junkyard’s security feed. According to testimony at a Friday hearing by Pope County Sheriff Investigator Eric Riggs, Barefield was then seen returning to the salvage yard at about 1:15 a.m., carrying an AR-15 rifle.

According to a report by The Arkansas Democrat-Gazette, another owner of U-Pull-It Auto Parts salvage yard is Randy Barefield. The paper said that Barefield’s relationship with suspect Tyler Barefield is unclear. But a search of the public records database Intelius lists a Randy Barefield as 63 years old and living, at least at one time, in Russellville — the same hometown listed on Tyler Barefield’s Facebook page.

The Intelius listing also names Tyler Barefield as one of Randy Barefield’s relatives.

3. Police Say That Barefield Shot Both Victims Before Crushing Them

Prosecutors hit Barefield with the maximum possible charges — two counts of capital murder, a death penalty offense. Barefield appeared at a court hearing Friday morning where he was denied bond, meaning he will likely stay behind bars until trial. He is expected to enter a plea at his next hearing, which is scheduled for October 31.

The bodies were discovered on Tuesday morning when a sheriff’s deputy noticed blood running out of the back of a crushed vehicle at the Barefield’s salvage yard. Barefield admitted the he crushed the car, according to the sheriff’s investigator, but denied that he committed the murders or being on the site when the two men were killed.

Joseph (Tyler) Barefield made call to Pope Co. SO about suspicious activity. Deputy found blood dripping from truck, paged back up.

Pope County Sheriff Shane Jones told KTHV TV News that the two men were shot to death, then put in a car and then crushed. And then the crushed car was placed on top of another pile of cars.

Jones said that Brock and Dewitt were found in the seats of the crushed car, though earlier reports said they were found ijn the trunk.

4. The Family of Beau Dewitt Has No Idea Why He Was Killed

A local television station, KARK, tracked down a sister of victim Beau Dewitt, who said that her family had been worried since Saturday when they realized that Beau Dewitt was missing.

The sister, who currently resides in California, told the station that Dewitt and Brock were dropped off at the auto salvage yard late on Friday night and were supposed to be picked up by whoever left them there within an hour or two. What the family did not know at the time was that someone, allegedly Barefield according to police, had killed her brother and his friend and stuffed their bodies into the trunk of a salvage car which was crushed.

“To scare them is one thing, but they obviously had the intent to kill them,” she said. “They knew what they were doing, so why?”

The sister says no one in her family knows why someone wanted to kill Beau Dewitt.

The Killings Stunned the Russellville Neighborhood

With fewer than 30,000 people, Russellville is a small city, but still the largest in Pope County. Residents there were stunned by the grisly crushed-car murders.

“It’s kinda-it’s just scary,” Vickie Taylor, who has lived for your decades down the road from where the bodies were found, told KATV News. “Made me kind upset, because I live right down the road from here, and I really don’t how they got there.”

Dewitt’s mother told the Arkansas Democrat-Gazette that she is relieved that police acted quickly to arrest a suspect in the death of her son and his best friend, and expressed disbelief that they may have been murdered for stealing salvaged auto parts.

“I’m just happy they finally caught somebody, and we can get some answers,” the mom said. “It’s not like they were robbing diamonds out of a diamond mine. A little extreme, for trespassing.” 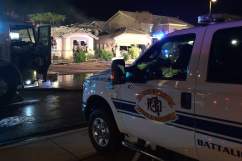