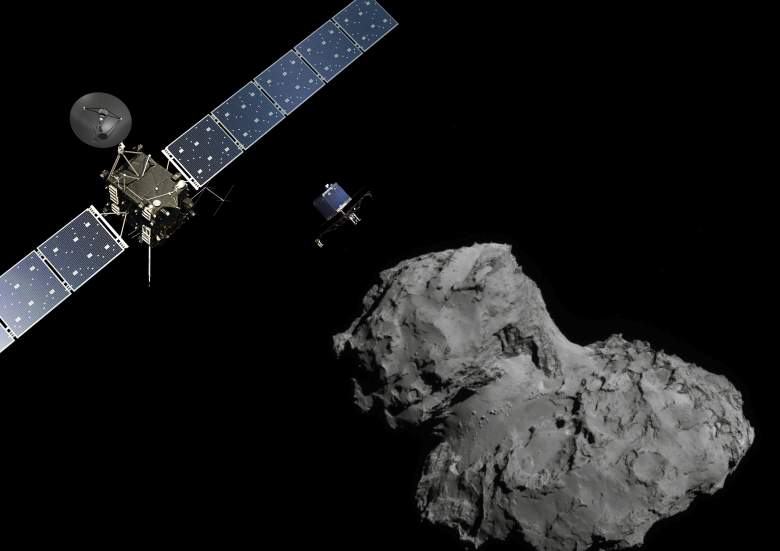 What time is Rosetta landing on Comet 67P? (Getty)

The Rosetta spacecraft arrived at comet 67P/Churyumov–Gerasimenko in 2014 after completing a 10-year journey. This morning, the spacecraft will be ending its journey and crash landing on the comet, taking a few pictures on its way down. The spacecraft was last in the news when it recently spotted the Philae Lander after losing it in 2014. What time is this spacecraft’s journey coming to an end this morning?

The Rosetta spacecraft is currently scheduled to land on Comet 67P at 7:20 a.m. Eastern, but this time could change. The landing was originally predicted to happen at 12:40 CEST or 6:30 a.m. Eastern (give or take 20 minutes), according to the European Space Agency. However, a more recent update from the ESA, as of late Thursday night, put the landing time as being at 13:20 CEST (or 7:20 a.m. Eastern). The exact time is still subject to change. If you’re planning on watching the landing, just to be on the safe side, you should have the live stream running by about 6 a.m. Eastern and check ESA’s Facebook page or the ESA’s webpage here for updates or last-minute changes.

ESA has also said that it will share a more detailed estimate of the exact time of the landing around 4 a.m. Eastern on Rosetta’s Twitter page and the ESA’s Facebook page. You should also be able to find out the time on our livestream link.

You can watch a live stream of the Rosetta’s landing at this link.

In the meantime, here are some videos you can watch to look back at the Rosetta’s history and understand more about what’s happening today.

And here’s a video from the European Space Agency describing the Rosetta’s trajectory as it approached Comet 67P.

Below is a video dramatizing what will be Rosetta’s final path:

See photos of the Philae Lander, just found by the Rosetta earlier this month, in the article below:

Read More
Breaking News, Space
Rosetta is landing on a comet this morning, but at what time? Find out here.