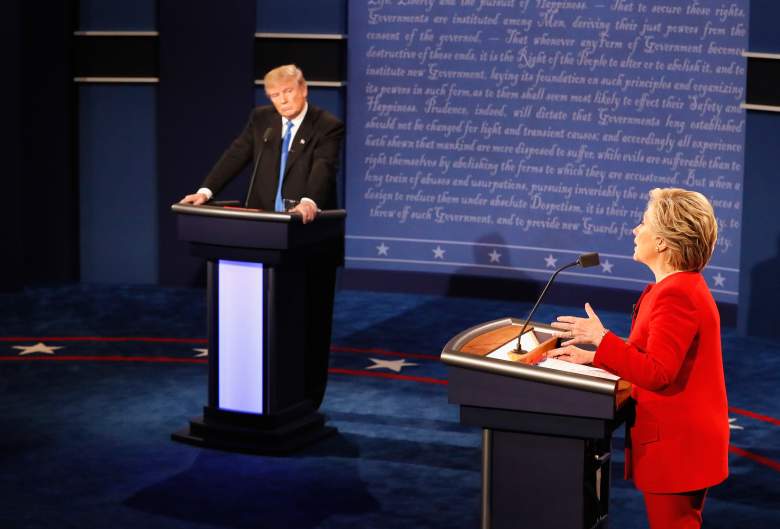 Hillary Clinton and Donald Trump faced off Monday night in the first of three debates they will hold before Election Day.

Although it won’t be clear for a few days if the debate impacted the polls in either direction, Clinton received favorable results among several polls evaluating the who won the debate.

A CNN/ORC poll of debate watchers released after the event found 62 percent felt Clinton won compared to 27 percent for Trump. However, the poll suggests the debate audience was a bit more Democratic than the public as a whole.

Another positive indication for Clinton was how quickly the betting odds moved in her favor during the debate.

Clinton’s odds of winning the election at Predictwise, which aggregates data from betting markets, moved from 69 percent before the debate to 73 percent in the hour after it ended.

This will drift a little overnight, but Clinton up 4 pp from 69% to 73% during course of debate https://t.co/iVgKTSRLoR pic.twitter.com/6YkMFGBiky

Clinton is up 4 percentage points nationally and up in all swing states, according to Predictwise.

The prediction market at PredictIt also showed a lot of movement following the debate. According to their data, Trump’s betting odds plunged from 39 to 31 percent.

Lots of fun watching #debatenight markets tonight! Lots of movement today, but HillaryClinton has a 70% chance of being #POTUS. #debates pic.twitter.com/ipZWLJ0D9Z

A Clinton contract on PredictIt gained 6 cents from the previous day to 69 cents, while a Trump contract fell 7 cents to 31 cents. PredictIt allows you to make predictions on future events by buying shares in the outcome. Each outcome has a probability between 1 and 99 percent, converted into US cents.

Clinton has been a favorite throughout the campaign, but her odds have fallen over the past several weeks as the national and state polls have tightened.

As New York Times’ Nate Cohn pointed out, Clinton’s margin in the CNN/ORC poll following Monday’s debate is similar to Mitt Romney’s margin over Barack Obama in the first presidential debate of 2012. The polls immediately shifted, with Romney even briefly leading.

Polls released on the eve of the first debate show how tight the 2016 presidential race has become in recent weeks.

A national Bloomberg poll found Clinton and Trump tied at 46 percent in a head-to-head survey, with Trump leading by 2 points in a race that includes Gary Johnson and Jill Stein.

Trump moved into the lead this morning in 538’s “nowcast,” which attempts to convey what might happen if the election were today. However, Clinton moved back into the lead after a few more favorable polls.

According to the latest NBC News SurveyMonkey Weekly Election Tracking Poll, just hours ahead of the first debate, Clinton led by 5 points, 45 percent to 40 percent in a four-way race, unchanged from last week.

In a two-way match-up without the third-party candidates, the poll showed Clinton has a 7-point advantage over Trump, 51 percent to 44 percent.

The NBC News SurveyMonkey poll was conducted online among a national sample of 13,598 adults who are likely to vote.

Loading more stories
wpDiscuz
6
0
Would love your thoughts, please comment.x
()
x
| Reply
Hillary Clinton and Donald Trump faced off Monday night in the first of three debates they will hold before Election Day. Here is a look at how the betting markets shifted following the debate.