Responding on Tuesday to Republican presidential candidate Donald Trump’s repeated claims that the November election will be “rigged” in favor of Democrat Hillary Clinton, President Barack Obama had some sharp words for Trump, telling the former reality TV star to “stop whining.”

Watch video of Obama’s rebuke of Trump, delivered during a press conference in the White House Rose Garden, in a joint appearance with Italy Prime Minister Matteo Renzi, in the video above.

Trump in recent days has frequently repeated his claim that the presidential election will be somehow “rigged” against him, rhetoric that historians and political experts have condemned as misleading and dangerous.

“History is replete with illegal things going on during elections, but at this point in the 21st Century, to make the grandiose statement like Trump is — that the election is rigged is bogus — it is anti-democratic spirit, it is anti-American at its core,” historian Douglas Brinkley told CNN.

“It is virtually impossible in 2016 to rig an entire election,” Princeton University historian Julian Zelizer said. “It is decentralized, it’s fragmented, and there is very little evidence that this could happen.”

Because elections are run by states and counties, not by the federal government, local election officials and secretaries of state have taken offense to Trump’s suggestion that they are somehow corrupt or in the tank for Clinton — including Republicans.

“He may have heard reports of it, but we need facts. And right now, there are no facts that support his claims [of election rigging],” Ohio’s Republican Secretary of State Jon Husted said on Tuesday. “I want to reassure Donald Trump as a Republican that is not happening across the country.”

Here are the full remarks made by Obama in response to a press question about Trump’s “rigged election” claims, as delivered at the White House on Tuesday.

One of the great things about America’s democracy is we have a vigorous, sometimes bitter political contest and when it’s done, historically, regardless of party, the person who loses the election congratulates the winner, who reaffirms our democracy and we move forward.

That’s how democracy survives because we recognize that there’s something more important than any individual campaign. And that is making sure that the integrity and trust in our institutions sustains itself.

Because democracy, by definition, works by consent, not by force. I have never seen, in my lifetime or in modern political history, any presidential candidate trying to discredit the elections and the election process before votes have even taken place.
It’s unprecedented. It happens to be based on no facts; every expert, regardless of political party, regardless of ideology, conservative or liberal, who has ever examined these issues in a serious way, will tell you that instances of significant voter fraud are not to be found, that — keep in mind, elections are run by state and local officials, which means that there are places like Florida, for example, where you’ve got a Republican governor, whose Republican appointees are going to running and monitoring a whole bunch of these election sites.

The notion that somehow if Mr. Trump loses Florida, it’s because of those people that you have to watch out for, that is both irresponsible and, by the way, doesn’t really show the kind of leadership and toughness that you want out of a president.
If you start whining before the game’s even over, if whenever things are going badly for you and you lose, you start blaming somebody else, then you don’t have what it takes to be in this job because there are a lot of times when things don’t go our way or my way.

That’s OK, you fight through it, you work through it, you try to accomplish your goals. But the larger point I want to emphasize here is that there is no serious person out there who would suggest somehow that you could even — you could even rig America’s elections, in part, because they are so decentralized and the numbers of votes involved.

There is no evidence that that has happened in the past or that there are instances in which that will happen this time. And so I’d invite Mr. Trump to stop whining and go try to make his case to get votes. 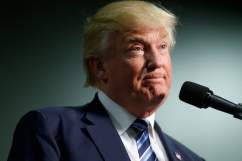