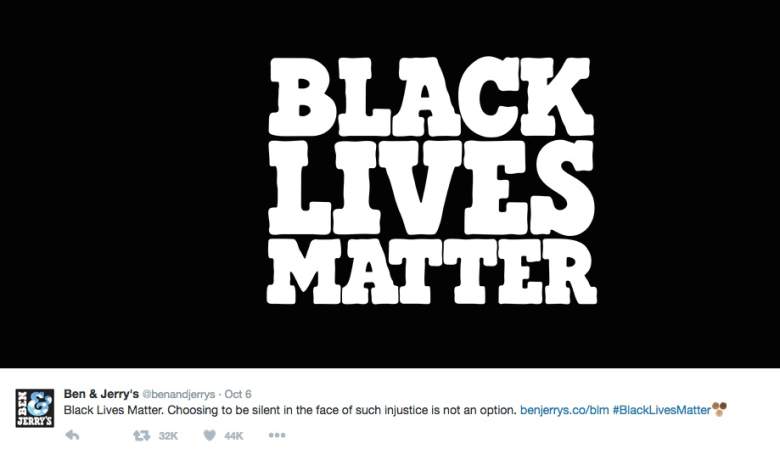 Ice cream company Ben & Jerry‘s released a statement on “Why Black Lives Matter,” which asks customers to “not be complicit” in joining a fight against what it calls systemic racism and injustice.

Twitter responded with #BenAndJerrysNewFlavor, which ties in racial justice language with possible ice cream flavors. Suggestions from Twitter users had phrases associated with the Black Lives Matter movement, along with images and GIFs of famous black Americans.

He Was Unarmed Dough ?#BenAndJerrysNewFlavor

In its statement on Thursday, Ben & Jerry’s said, black lives matter “because they are children, brothers, sisters, mothers, and fathers.

“They matter because the injustices they face steal from all of us — white people and people of color alike. They steal our very humanity.”

The statement said the first step is to understand there is systematic racism and injustice. Ben & Jerry’s also made sure it offered “respect and value” to law enforcement, adding, “the commitment to our communities that those in law enforcement make, and we respect the value of every one of their lives.”

“All lives do matter. But all lives will not matter until Black lives matter,” the statement reads.

Twitter turned to the names of famous African Americans:

This isn’t the first time Ben & Jerry’s has taken a political stance. In May, the company released “Empower Mint,” a peppermint ice cream with fudge brownies and fudge swirls.

“Since our country’s inception, many brave Americans have battled to expand voting rights and voter access for African Americans, for women, and young people, but the recent passage of restrictive policies in North Carolina takes our country backwards,” said cofounder Ben Cohen in a press release.

Wish a Nougat Would #BenandJerrysNewFlavor