A teenager shot and killed by Los Angeles police was identified by his family as Carnell “CJ” Snell Jr., according to ABC 7.

Police said they recovered a gun at the scene and that Snell was armed when he was shot during a foot chase, but family members and a former teacher contended Snell was shot in the back, perhaps as many as five times, and that he had his hands up. These details, which spread quickly on Twitter the night of October 1, sparking outrage, were unconfirmed. Police released a video on October 4 showing Snell with a gun. You can watch it in the second section of this story. Here’s a screen shot:

The Los Angeles Times and other news outlets reported that Snell was 18.

5. Relatives told me the 18-year-old killed by #LAPD in South L.A. was Carnell "CJ" Snell. Said he lived on the street he was shot.

The shooting death of Snell comes as tensions remain high in California over police-related shootings. His death provoked protests in the streets as upset citizens stood face-to-face with police in riot gear. The unrest continued on Sunday night, when there were also reports of another officer-involved shooting near where Snell died.

Police said the unidentified person who was shot Sunday has died and a replica gun was recovered. Early reports on ABC 7 said gang officers had received a call of an armed man, and there was no indication the shooting had any relation to the protests or Snell’s death.

A crowd has stopped traffic at intersection of 108th and Western in response to the police killing of Carnell Snell Jr. yesterday @KTLA pic.twitter.com/jkk0BeurT7

People lamented that Snell, only a teenager, was now a hashtag on Twitter.

1. Carnell’s Former Teacher Said He Was ‘Trying’ & Made Her Day ‘Every Day’

Intersection of 108/Western, not far from where CJ Snell was fatally shot by #LAPD, now covered in chalk messages. pic.twitter.com/MrfWUbChup

Tiffany Hobbs posted a photo of Snell on Facebook, along with a message that includes the claims that Snell was shot in the back while his hands were up. Her Facebook post seems to be the genesis of many of the claims on Twitter to that regard. This is what she wrote:

Just learned that the police killed one of our former students 3 hours ago. Carnell was trying. Im afraid of my numbness. Im afraid of the rage that stays on the tip of my tongue. Im afraid of Carnell’s life being reduced to a hashtag. His hands were up when he was shot in the back. He will always be more than what the LAPD considers as disposable. He made my day everyday. He made all of our days. He was 18. Rest sweet, Carnell. #CarnellSnell

The details Hobbs imparted of the shooting are unconfirmed. On her Facebook page, she said the details came from witnesses she didn’t identify.

Memorial growing for #Carnellsnelljr in front of home where he was killed in #lapd #OIS in #SouthLA. Balloon release planned. 5pm on @ABC7 pic.twitter.com/JIQ6Fm84GG

Another woman wrote a detailed post on Facebook describing meeting Snell a few days before he died.

CBS Los Angeles reported, “Witnesses told CBS Los Angeles the deceased man — believed to be Snell — was running with his hands up, and said he was telling officers he was unarmed, when police shot him about five times.” 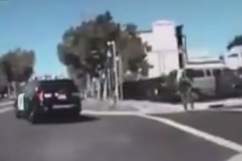 2. Police Said the Shooting of Snell Occurred After a Pursuit of a Stolen Vehicle & A Gun Was Recovered at the Scene

According to CBS News, Beck said “officers were justified in their use of deadly force because they feared for their lives.” He was killed soon after the surveillance video, which doesn’t show the shooting, said CBS.

KABC reports that police say that, around 1:40 p.m., they tried to stop a car with paper plates they thought was stolen near Western Avenue and 106th Street. A chase ensued.

“Police said a male passenger exited the vehicle near the area. Officers began chasing the suspect, heading eastbound down 107th Street into the back a home and an officer-involved shooting occurred,” said KABC, adding that police did not detail exactly what led to the shooting of Snell. They have not released details about the position of his hands or where he was shot, either.

The police chief said a loaded gun was recovered at the scene and released this photo:

KTLA said the police chief on October 3 said, “While holding the handgun in his left hand, he (Snell) turned in the direction of pursuing officers…A total of six rounds were fired” by officers.

You can read the full police press release, which was posted on Twitter the morning of October 2, here. It remains vague about the moments right before the shooting, as well as where on his body Snell was shot.

The LAPD had only provided scant details about the shooting on October 1, but the department did disseminate some information via Twitter and at a press conference. Specifically, the LAPD said the shooting unfolded after a stolen vehicle pursuit, and indicated that police had recovered a gun at the scene.

#LAPD OIS: After a pursuit of a stolen vehicle, an OIS occurred in area of 107th & Western at about 1 pm, gun recovered at scene.

The driver in the pursuit was initially still being sought by police.

The chase occurred around 1 p.m. on October 1, said The New York Daily News. 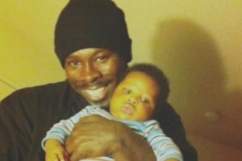 3. Snell’s Grief-Stricken Mother Begged to See Snell at the Scene

The mother of an 18-year-old shot by #LAPD pleads with them to see her son at the scene in south LA. @latimes @lanow #policeshootings pic.twitter.com/gu6ePNK5Bw

“We’re going to try to get you down there, but that won’t happen for a little bit,” an unidentified man says to the distraught mother.

In another video, the mother claimed she received a phone call that the police shot Snell “five times in the back.” She says he had just left her house.

Carnell’s sister, Trenell Snell, 17, told The Los Angeles Times she was “outside with friends when she saw her older brother, CJ, running from police…she heard gunfire — ‘boom, boom, boom, boom.'” He was shot after being chased toward the back of a house, said The LA Times.

One woman said on Facebook that Snell was shot on the street he lived on. His brother wrote on Facebook, “please no dont let it be my brother i hope my brother okay god…”

4. Angry Crowds Gathered at the Scene

As has occurred in other recent police shootings, crowds gathered at the scene of the shooting, which occurred on Saturday afternoon. The protests have now continued for days as outrage grows over the death of Snell in South L.A.

The protests were getting more unruly late Sunday.

Things turning at what used to be a peaceful protest.We've watched cars doing donuts&ppl spray painting their neighborhood. Tune to #KCAL9 pic.twitter.com/4HqX12ixTk

One woman streamed live on YouTube for hours from the scene:

As word spread of Snell’s young age, people indicated on social media that they were headed to the scene to protest.

Another one of our ppl gone #CarnellSnell

People on Twitter were upset by photos that they thought showed police in riot gear before any protests started.

People are heading over to 103rd and Western where LAPD Killed another person today.

The mayor’s house was egged.

Some people expressed exhaustion on social media over the trauma of yet another police shooting death in the news.

There have been days of protests in El Cajon, California over the shooting death of Alfred Olango, 38, who was holding an electronic vape device when he was shot and killed by a police officer.

Police in El Cajon said Olango assumed a shooting-like stance with the device. There have also been protests in Pasadena, over the Friday death of Reginald Thomas in a struggle with police at his home. Up north in Sacramento, there is outrage over the death of Joseph Mann, a mentally ill homeless man who was shot 14 times and killed by police who were captured on audio talking about trying to run him over.

#BREAKING Protesters marching in #Pasadena and blocking Rose Bowl shuttles. They are angry after a man died after being tased by PD. pic.twitter.com/DBnkqRwQfP

The shooting of Olango in El Cajon has sparked days of unrest in that community, which is a suburb of San Diego. Police and the district attorney there released a citizen cell phone video of Olango’s shooting, which has generated further outcry.

You can watch the Olango video here: 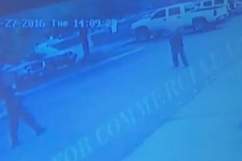