The Los Angeles Police Department, in an attempt to combat outcry over the police shooting death of a South L.A. teenager, has released video showing Carnell Snell Jr. with a gun.

You can watch it above. The LAPD released the video on its YouTube channel.

The shooting death of Snell by Los Angeles police sparked days of unrest in Los Angeles. Social media accounts and those from Snell’s family and friends had alleged that police shot Snell in the back and multiple times. KTLA said the police chief on October 3 said, “While holding the handgun in his left hand, he (Snell) turned in the direction of pursuing officers…A total of six rounds were fired” by officers.

KABC reports that police say that, around 1:40 p.m., they tried to stop a car with paper plates they thought was stolen near Western Avenue and 106th Street. A chase ensued.

“Police said a male passenger exited the vehicle near the area. Officers began chasing the suspect, heading eastbound down 107th Street into the back a home and an officer-involved shooting occurred,” said KABC, adding that police did not detail exactly what led to the shooting of Snell. They have not released details about the position of his hands or where he was shot, either.

However, the Los Angeles police chief and spokesman have fought back hard against social media narratives by arguing that Snell was armed with a gun that police recovered at the scene. Police previously released this photo of the gun:

You can read the full police press release here:

Learn more about Snell here, including accounts from family and a teacher who knew him: 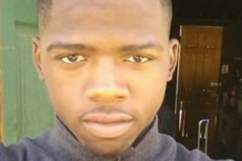