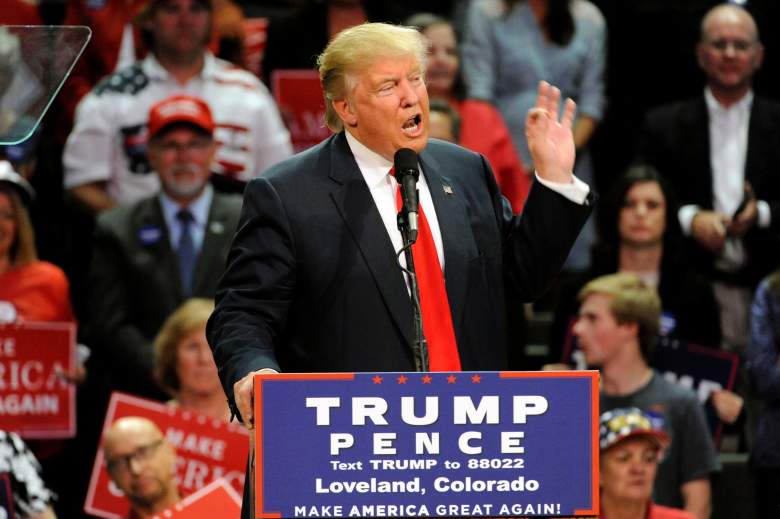 Although Donald Trump will not be taking part in the vice presidential debate between his running mate Mike Pence and Hillary Clinton‘s, Tim Kaine, he made his presence felt. He kept his promise to live-tweet the debate, starting a half hour before it is scheduled to begin at Longwood University.

“I will be watching the great Governor @Mike_Pence and live tweeting the VP debate tonight starting at 8:30pm est! Enjoy!” Trump wrote. However, the debate started at 9 p.m. ET. It is the only debate between Kaine and Pence.

I will be watching the great Governor @Mike_Pence and live tweeting the VP debate tonight starting at 8:30pm est! Enjoy!

During the debate, Trump mostly retweeted followers and links to new press releases his team was posting throughout. He did say that Pence was “doing a great job,” just a half-hour into the debate. He won’t be able to live-tweet on Sunday night, when Trump will debate Clinton for a second time.

“Mike Pence won big. We should all be proud of Mike,” Trump tweeted just seconds after the debate was over.

Before the debate, Trump tweeted about Bill Clinton’s comments on Obamacare. On Monday, the former President called Obamacare “the craziest thing in the world,” comments that Clinton later had to clarify. “Look, the Affordable Health Care Act did a world of good, and the 50-something efforts to repeal it that the Republicans have staged were a terrible mistake,” Bill Clinton said on Tuesday.

Wow, did you just hear Bill Clinton's statement on how bad ObamaCare is. Hillary not happy. As I have been saying, REPEAL AND REPLACE!

Trump has also suggested his supporters watch Fox News instead of CNN.

Wow, @CNN is so negative. Their panel is a joke, biased and very dumb. I'm turning to @FoxNews where we get a fair shake! Mike will do great

Trump tweeted directly to Fox News anchor Megyn Kelly, telling her that he is tweeting from Nevada.

.@megynkelly– I am in Nevada. Sorry to inform you Kellyanne is in the audience. Better luck next time.

Trump then retweeted a follower who said that Kaine couldn’t “go 12 seconds without a lie.”

"@RoadkingL: @mike_pence Wow, Kaine couldn't go 12 seconds without a lie. Marines and military are scared of the liar running. #bengazi"

Trump then retweeted a message posted on Pence’s own Twitter feed during the debate, comparing Kaine’s resume as Virginia governor against Pence’s resume as Indiana governor.

There’s one clear choice in this election to create jobs and grow the American economy. #VPDebate pic.twitter.com/cvv0cK6Fbt

He then retweeted one person who said that “Kaine looks like a fool!”

"@elisac006: @nycmia @realDonaldTrump I agree. Kaine looks like a fool!!"

Trump just retweeted someone who suggests that Kaine “looks like an evil crook out of the Batman movies.” Which Batman villain is this person referring to?

"@Jnelson52722: @realDonaldTrump @Susiesentinel Kaine looks like an evil crook out of the Batman movies"

Trump has finally returned to tweeting his own thoughts, declaring Pence an early winner.

.@mike_pence is doing a great job – so far, no contest!

“Since January 2013, Indiana’s labor force has increased by more than 186,000 jobs. You have to understand, I’ve gone around to all these states,” Trump said in July. “I’ve gone to all of them. And every time, I have statisticians. I say give me the stats on a state. And it’s always bad, down, down, down. Down 40 percent, 50 percent, 60 percent in some cases. Here’s somebody where it’s gone up. Private sector job growth is up by more than 147,000 jobs since 2013. That’s like very unusual.”

The Trump campaign again compared Kaine’s performance as governor to Pence’s with a press release, pulling quotes from the debate. “Pence: I ran a state that worked; Kaine ran a state that failed,” the release headline reads.

Trump vowed on Twitter that he and Pence will “defeat #ISIS.”

In another press release, Trump’s campaign wrote that Clinton’s Syria policy was “judged a failure.”

During the debate, Kaine and Pence argued about Trump’s comments about Putin. The Trump campaign that listed instances of “Clinton’s Close Ties to Putin.”

As the debate neared its end, Trump’s team continued issuing press releases. Another one declares Clinton “weak on North Korea.”

Seconds after the debate was over, Trump declared Pence the winner.

Mike Pence won big. We should all be proud of Mike! 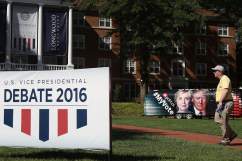