Early voting results in the 2016 presidential election are rolling in from states around the country, and so far, the numbers show few surprises and appear to be confirming what most polls have said throughout most of the campaign and in particular for the last few weeks — that Democrat Hillary Clinton holds a solid lead and her Republican opponent, Donald Trump, faces a steep uphill battle if he plans to turn the results around in the 12 days remaining before the November 8 national vote.

The New York Times Upshot — the Times’ data journalism and polling analysis section — on Thursday began posting its estimate of how the final vote tally will turn out in North Carolina, based on a statistical analysis of early voting results. According to Upshot, early voting indicates that Clinton will win the Tar Heel State with 49.1 percent of the vote. Trump will place a distant second at 43.1 percent — a full 6 percentage points.

How do those North Carolina projections based on early voting compare to current poll numbers across the country?

According to the Huffington Post Pollster.com average of all presidential polls pitting Trump against Clinton — and including Stein and Johnson — Clinton holds a lead of 45.9 percent to 39.4 percent.

While the various poll aggregators have varying methods of computing their averages, the Pollster.com national average agrees closely with the national polling average compiled by FiveThirtyEight.com, which shows Clinton with 45.7 to 39.9 for Trump.

By comparison, in the 2012 presidential election, Democrat Barack Obama defeated Republican challenger Mitt Romney by under four points, 51.1 to 47.2.

The various states where early voting is underway have also shown results consistent with the polling averages for those states, according to political scientist and early voting expert analyst Michael McDonald of the University of Florida.

In Nevada, McDonald wrote earlier this week, “there is nothing in these early voting numbers that contradict recent polling showing Clinton taking a lead in the state.”

The California results are notable however, not because they show Clinton cruising to an expected victory — with registered Democrats returning their vote-by-mail ballots at rate 25 percent over the rate in the 2012 election, and Republicans up only six percent — but because of the extraordinary spike in Latino voting, reflected in the early voting numbers.

So, you wanna compare Vote By Mail rates to 2012 General? I'm game, but first… digest this… Who votes by mail has changed dramatically. pic.twitter.com/4aXYMQDXZO

Latino voters, as the above chart reveals, have returned California vote-by-mail ballots at a rate 45 percent higher than four years ago.

One state that shows a slight but significant difference between early voting and and polling numbers is the traditionally Republican-voting Arizona. With the lone exception of Bill Clinton in 1996, no Democrat has carried Arizona since Harry Truman in 1948. And Trump currently holds a narrow lead of 1.3 percentage points there, according to the Pollster.com average.

Donald Trump campaigning in Ohio where he and Clinton are running neck-and-neck in polls. (Getty)

But analysis of early voting in Arizona as of October 27, shows a surge in Democratic ballots returned compared to 2012, when Republican Romney beat Democratic incumbent President Obama by more than 10 points. 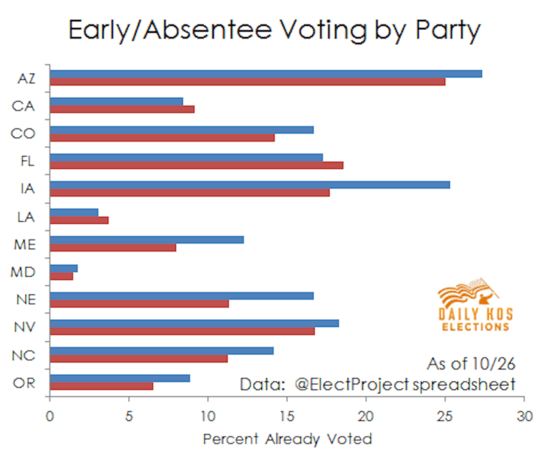 According to a CNN count, Democrats are running 4,116 returned ballots ahead of Republicans as of Thursday. But at the same point in the process four years ago, the GOP held a solid 21,179 ballot lead.

Early voting was heavy in Arizona in 2012, with two-thirds of all voters in the state casting their ballots prior to election day. If that trend holds in 2016, Clinton stands a strong chance to turn the state “blue,” in what would be one if the biggest upsets of the election. 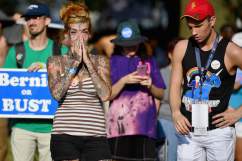 Loading more stories
wpDiscuz
65
0
Would love your thoughts, please comment.x
()
x
| Reply
Early voting results are rolling in, but how do they compare to the presidential polls? Was polling right? Or do the early results prove them wrong?