The event was held at the Haverford Community Recreation and Environmental Center.

During the town hall, Clinton, her daughter, Chelsea, and Banks opened up the stage to alleged impromptu questions.

One 15-year-old girl asked, “At my school, body image is a really big issue for girls my age. I see with my own eyes the damage Donald Trump does when he talks about women and how they look. As the first female president, how would you undo some of that damage and help girls understand that they are so much more than what they look like?”

However, YouTuber Spanglevision suggests that the question may have been staged by pointing out that the apparently randomly selected girl is a local child actor with an IMDb, or an Internet Movie Database page.

It was later shared by a Redditor DJ_Dynasty_Handbag that Leach’s father is Democratic state senator, Daylin Leach. The New York times reports that he later admitted to helping his daughter write the question.

Spanglevision presents his argument why the question was staged in the video above. What do you think? 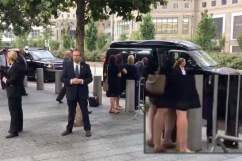