1. Someone ‘Had Too Much Information’ On the Clintons, Causing Them to Set Up a Private Server

The new file says that the private server in the basement of Bill and Hillary Clinton’s New York home was installed in either 2006 or 2007 while Hillary Clinton was still a United States Senator from New York. While it was originally set up for use by the former president, Hillary Clinton was added to the server while she was in the Senate, according to what Bill Clinton aide Justin Cooper told the FBI.

Cooper and another person, whose name is redacted in the new FBI documents, were aware of “attempted intrusions into the system,” which happened “a few times each year.” They were also concerned that a third person, whose name is also whited-out in the documents, “had too much private information about the Clintons” and may have even “had access to some of their communications.”

2. A ‘Sensitive’ Document Was Found on a Server in Romania

A document pertaining to Libya was allegedly found on Romanian server. (Getty)

A “sensitive” document was found by an independent investigator on a server in Romania, and the file appeared to originate with an internet IP address compatible with the address of the Clinton server.

The “sensitive” Microsoft Excel document contained names of suspected jihadi terrorists inside Libya and was written — for some reason — partly in Russian. It was uncovered in 2015 as part of a $32,000 project funded by the right-wing group Judicial Watch, who hired an independent security expert, whose name is redacted from the FBI document, to scour the “dark web” looking for material that may have come from Clinton’s server.

3. An Official Offered the FBI a ‘Quid Pro Quo’ to Unclassify Email

A State Department official, Patrick Kennedy, offered a “quid pro quo” if the FBI would flip at least one email from “classified” to “unclassified,” so that it could be released to the public in response to a Freedom of Information Act request. The FBI denies that it acted on any such “quid pro quo,” which according to the documents would have involved allowing the FBI to place agents in countries where they previously were prohibited from doing so — namely Iraq.

The FBI issued a statement Monday saying that it reviewed Kennedy’s request and turned it down, and that the document in question “remains classified today.” The FBI denied that any “quid pro quo” took place.

FBI Statement: "There was never a quid pro quo, these allegations were nonetheless referred to the appropriate officials for review." FULL: pic.twitter.com/cezRG7Tt2P

The State Department also issued a statement flatly denying the “quid pro quo” allegation, saying that it “does not align with the facts,” and that “no increase in FBI Iraq slots resulted from this conversation.”

The email apparently pertained to Libya, and the FBI classified it on the basis that its contents could “do harm” to that country’s government — not to the United States. The State Department contended that Libya had no “official government” and therefore, the email should not remain classified. But after lengthy discussions with Kennedy, FBI officials disagreed.

The incident is described on pages 25 and 26 of the FBI document, which can be read below on this page. 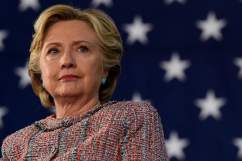 In one FBI interview, an unnamed person told investigators that group of high-ranking State Department officials met in secret to review Freedom of Information Requests for Clinton’s emails and other material. The group was referred t within the State Department as “The Shadow Government.”

“There was a powerful group of very high-ranking STATE officials that some referred to as ‘The 7th Floor Group’ or ‘The Shadow Government.’ This group met every Wednesday afternoon to discuss the FOIA process, Congressional records, and everything CLINTON-related to FOIA/Congressional inquiries,” the person told the FBI.

Here is the entire, 100-page document released on Monday by the FBI. It completes the set of four files the Bureau said it would release. The previous three can be accessed at this link. 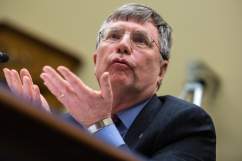