hey, @realDonaldTrump – regarding your claim that Captain Khan would be alive if you were president:

Jesse Lehrich, the foreign policy spokesman for Hillary Clinton, told Donald Trump to “go f**k yourself” after Trump suggested that if he was president during the Iraq War, Captain Humayun Khan would not have been killed. Trump made the comment during the second presidential debate with Clinton.

Lehrich did not delete the tweet, but he has apologized for the “clearly inappropriate nature and language of this personal tweet.”

I want to apologize for the clearly inappropriate nature and language of this personal tweet. Sorry all.

Trump got into a feud with the Muslim soldier’s parents during the summer after they spoke at the Democratic National Convention. During the debate, Trump agreed that their son, who died in the Iraq War, was an American hero. However, he said that if he was president during the Iraq War, Khan would never have been killed.

Lehrich serves the Clinton campaign as a foreign policy spokesman. In June 2015, The New York Times reported that he first worked as an unpaid volunteer for Clinton and opened a headquarters for her in Brooklyn. He previously worked for the Democratic super-PAC American Bridge, The Hill reported in 2015.

After apologizing for his use of the f-word, Lehrich stopped live-tweeting the debate. 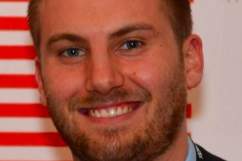