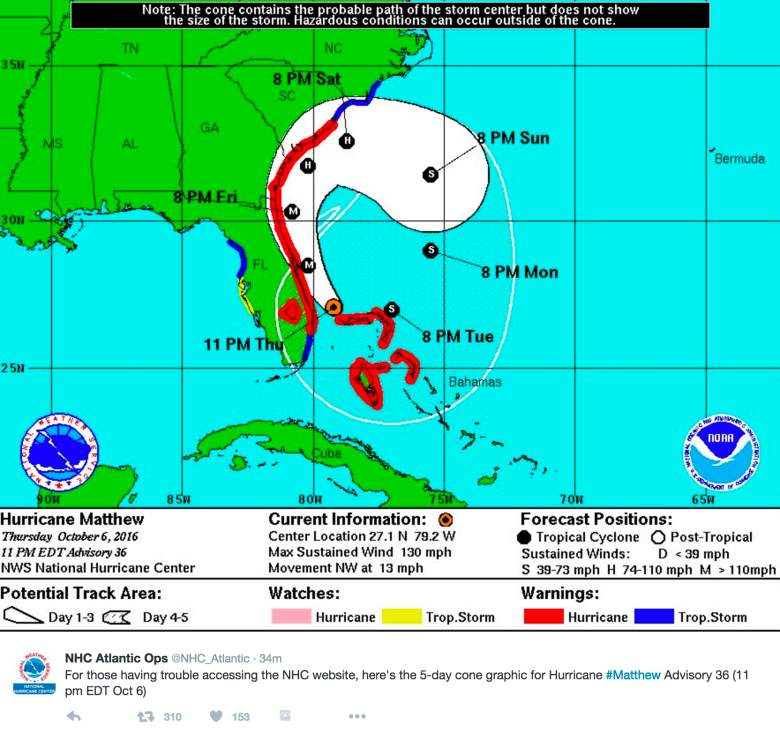 Hurricane Matthew is moving closer to Florida. It strengthened back into a Category 4 storm as it heads toward the East Coast, according to the National Hurricane Center. The photo above is the latest advisory from the NOAA, released at 11 p.m. The NOAA had to release the advisory via Twitter because its NHS website was down.

When will Hurricane Matthew make landfall in the United States and where?

Hurricanes can be hard to predict because they can sometimes change direction with little warning. At the time of publication, it’s unclear if Matthew will actually make landfall or just skirt around the east side, NOAA reported. According to the NOAA:

When a hurricane is forecast to take a track roughly parallel to a coastline, as Matthew is forecast to do from Florida through South Carolina, it becomes very difficult to specify impacts at any one location. Only a small deviation of the track to the left of the NHC forecast could bring the core … on shore within the hurricane warning area in Florida and Georgia. Modest deviations to the right could keep much of the hurricane-force winds offshore. Similarly large variations in impacts are possible in the hurricane watch and warning areas in northeast Georgia and South Carolina.”

According to an advisory released at 5 p.m. Eastern from NOAA and according to Weather.com,  the hurricane is expected to come close to the east coast of the Florida peninsula Thursday night through Friday night, but conditions could possibly linger early Saturday in the northeast part of Florida. This means the hurricane may impact south Florida, including Miami and Fort Lauderdale, by Thursday night, West Palm beach area later Thursday night into early Friday, Orlando Friday morning, and Daytona Beach later Friday morning. These are all estimates and subject to change, so keep an eye on NOAA for the latest updates.

Hurricane force winds extend up to 60 miles from the center, with tropical storm force winds extending up to 185 miles from the center. So the Florida coast will start feeling the affects of the storm long before it actually reaches the coast. Hurricane conditions will first reach hurricane warning areas in Florida this evening and will spread northward through Friday. Tropical storm conditions will continue to spread north in the warning area along the Florida east coast Thursday night and Friday, NOAA warned.

A storm surge could be dangerous, and the timing depends on the tide level. Storm surges combined with the tide could flood normally dry areas near the coast. Life-threatening flooding in these areas could be a danger over the next 36 hours from Florida’s east coast to the Georgia coast, from Deerfield Beach to Altamah Sound, NOAA reported. From Altamah Sound to South Santee River, there could be dangerous flooding over the next 48 hours. 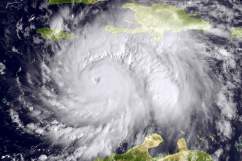 Hurricane Matthew Loop: Could the Storm Land in Florida Twice?