Illinois Senator Mark Kirk apologized for a shocking remark he made during a debate with his Democratic opponent, Representative Tammy Duckworth, on Thursday night. After the Iraq War veteran explained how her family has fought for the U.S. since the American Revolution, Kirk questioned her heritage.

“My family has served this nation in uniform, going back to the Revolution. I’m a daughter of the American Revolution. I’ve bled for this nation. But I still want to be there in the Senate when the drums of war sound,” Duckworth said. “Because people are quick to sound the drums of war, and I want to be there to say this is what it costs, this is what you’re asking us to do … Families like mine are the ones that bleed first.”

“I had forgotten that your parents came all the way from Thailand to serve George Washington,” Kirk told Duckworth. The debate hall was silent for a moment after his comment and the moderator moved on to the next question.

In a statement on Twitter, hours after the debate, Kirk finally apologized. “Sincere apologies to an American hero, Tammy Duckworth, and gratitude for her family’s service,” Kirk wrote.

Sincere apologies to an American hero, Tammy Duckworth, and gratitude for her family's service. #ilsen

Duckworth later responded to the apology, writing, “Thanks, Sen. Kirk. Let’s honor my family’s service – and your own – by sticking to the issues for the final week. See you Friday in Chicago.”

Thanks, Sen. Kirk. Let’s honor my family’s service – and your own – by sticking to the issues for the final week. See you Friday in Chicago. https://t.co/INdBtm5K3G

Kirk’s statement was incorrect. Although her mother is a Thai immigrant, her father is a Marine. Duckworth’s only response to Kirk’s comment was a post on Twitter, showing her father and herself in uniform with her mother. Duckworth herself is an Iraq War veteran and lost both of her legs in a helicopter crash.

My mom is an immigrant and my dad and his family have served this nation in uniform since the Revolution #ILSEN pic.twitter.com/ehEBHswFMs

Kirk spokeswoman Eleni Demertzi issued a statement to the Washington Post, but that did not include an apology.

Senator Kirk has consistently called Rep. Duckworth a war hero and honors her family’s service to this country. But that’s not what this debate was about. Rep. Duckworth lied about her legal troubles, was unable to defend her failures at the VA and then falsely attacked Senator Kirk over his record on supporting gay rights.

In September, CNN reported that Kirk claimed he was an Iraq War veteran on a campaign website. In reality, he was a member of the Navy Reserves for 23 years and did not serve in the Iraq War. He retired from the Navy Reserves in 2013.

Duckworth has represented Illinois’ 8th district since January 2013, while Kirk was first elected in 2009. The most recent polls show Duckworth ahead, according to Real Clear Politics. A late September poll from Southern Illinois University gives Duckworth a 48-34 lead over Kirk. 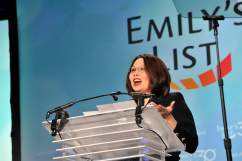 What Happened to Tammy Duckworth’s Legs?

Read More
Illinois, Politics
Illinois Senator Mark Kirk apologized to Tammy Duckworth for a racist heritage remark he made about her mixed-race heritage in a debate.