For years, Juanita Broaddrick has been alleging that Bill Clinton raped her in 1978 when he was Arkansas Attorney General. She’s given several detailed television interviews about the allegations, and she’s been tweeting repeatedly about the topic during the 2016 presidential election.

Donald Trump has now injected Broaddrick directly into the presidential race by retweeting several of her claims. This has renewed interest in Broaddrick’s allegations against Bill Clinton. You can watch a lengthy television interview that Broaddrick gave to NBC News and its Dateline program above in 1999. You can read a transcript of the Dateline interview with Lisa Myers here.

I kept telling him no. I don’t want this at all. You must have had the wrong idea. And he wouldn’t list… and he grabbed me again very forcefully and started biting on my top lip. And this was extremely painful. I thought he was going to bite my lip off. And that’s when he pushed me back on the bed…

You can watch that interview here:

Here are the Broaddrick tweets that Trump retweeted on the evening of October 8. On Twitter, Broaddrick defines herself as “Retired RN and business owner. I love working outside, playing tennis and family time with my son and grandson.”

Hillary calls Trump's remarks "horrific" while she lives with and protects a "Rapist". Her actions are horrific.

How many times must it be said? Actions speak louder than words. DT said bad things!HRC threatened me after BC raped me.

I was 35 years old when Bill Clinton, Ark. Attorney General raped me and Hillary tried to silence me. I am now 73….it never goes away.

Trump’s tweets came in the context of continued fallout over his own lewd comments toward women, which were unearthed in a 2005 interview with then Access Hollywood co-host Billy Bush. In that now infamous conversation, which was captured on videotape, Trump made crass comments about women, including one in which he said of his failed attempt to have sex with television host Nancy O’Dell: “I moved on her like a bitch, but I couldn’t get there. And she was married. Then all of a sudden I see her, she’s now got the big phony tits and everything. She’s totally changed her look.” In another controversial comment, he says that when people are a star, they can do anything. “Grab them by the p—y. You can do anything,” he says.

On Friday, October 7, Trump gave a highly unusual videotaped statement in which he apologized for the Billy Bush tape comments. However, in that statement Trump also pledged to dredge up Bill Clinton’s past in a big way, injecting it into the second presidential debate, which is Sunday.

Trump did not mention Broaddrick’s name in that interview. However, by retweeting her comments on Saturday, he was widely interpreted as putting Hillary on notice that he might focus on Broaddrick’s claims that Bill Clinton raped her when he was Arkansas’ Attorney General, and also that Hillary Clinton allegedly tried to help Bill cover it up.

In 1999, Bill Clinton’s attorney, David Kendall, denied the rape allegations on his behalf, says The Hill.

You can learn more about Juanita Broaddrick and her claims here: 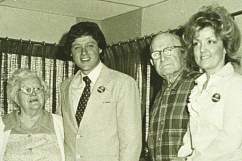 Read more about Juanita Broaddrick in Spanish at AhoraMismo.com: