UPDATE 10/12/16 @ 5:41 am:According to the Antigo Police Department, the video has nothing to do with the disappearance of Kayla Berg. They write:

The Antigo Police Department has been investigating the Hi Walter, its Patrick, I have a new girlfriend video that was on youtube.com. The Antigo Police with the help of another law enforcement agency has been able to identify that this video is 100% fake and was a video that was produced to be placed on youtube.com. The Antigo Police Department has identified the video producer/camera man, actor and actress in the video. THIS VIDEO HAS NO CONNECTION TO THE DISAPPEARANCE OF KAYLA BERG.
Thank you to everyone for their assistance in this investigation

A video published in 2009 titled “Hi Walter! I got a new gf today!” by Hi Walter! Its me Patrick! shows a woman chained and crying in a bathroom. Police are investigating if it is connected to missing Wisconsin teen, Kayla Berg.

The video was posted on October 11, two months after Berg, 15, disappeared in Wausau, Wisconsin after going for a ride with her brother’s friend from Antigo to her boyfriend’s house.

The video went viral after its discovery.

It is currently unclear who Walter or Patrick are. However, police have descended on a home in Marathon County, Wisconsin, but were unable to locate the man.

They are still looking for the man and have taken to Facebook to ask for the public’s help.

Berg’s mother, Hope Sprenger, told ABC News affiliate WAOW Wisconin 9 that the video could be her missing daughter. “[It] sounded like her, looked like her, it gave me chills… Disturbing. It made me sick to my stomach. The clothing could be a big possibility. We do believe she was wearing that type of shirt, we know she had jeans. I thought it looked a lot like her. I pray to God it’s not.”

Antigo Police confirmed that the girl in the video does look like Berg.

Police Chief Eric Roller told ABC 2 WBAY News about the people in the video, “We’ll do whatever we can to find out who’s in there and identify them. Sometimes that’s hard on the web because of wherever this stuff may originate from [but] we’re going to do everything we can to get to the bottom of it.”

However, some YouTube commenters believe the video is a hoax because the man, who calls himself Patrick, sounds scripted.

Watch the video above. Viewer discretion is advised. 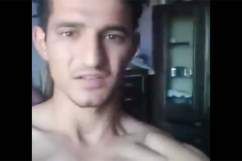 WATCH: Man Shoots Himself Dead on Facebook Live After Being Dumped by Girlfriend

Read more about Kayla Berg and this disturbing video in Spanish at AhoraMismo.com:

Read More
Missing, Wisconsin, Youtube
wpDiscuz
8
0
Would love your thoughts, please comment.x
()
x
| Reply
A video published in 2009 titled "Hi Walter! I got a new gf today!" by Hi Walter! Its me Patrick! shows a woman chained and crying in a bathroom. Police are investigating if it is connected to missing Wisconsin teen, Kayla Berg.