The first girl to play high school football for the North Penn High School team, Kelly Macnamara, became a sudden viral sensation this week when a brutal hit she delivered on an opposing player caught the attention of media outlets across the country.

A junior at North Penn in Towamencin Township, Pennsylvania — about 25 miles outside of Philadelphia — Macnamara is the team’s kicker. The hit came as a player for opposing Central Bucks High School East broke away for a long return after a trick reverse play on a kick return.

Watch the play as tweeted by Macnamara herself, who joined the Knights as a sophomore, in the above video.

Macnamara told her school newspaper last year that she had never played football before, but heard the team needed a kicker, so she tried out. A soccer player since the age of five, the teen felt that her legs were strong enough to drive a football through the uprights.

Here she is nailing a 32-yard attempt in a September 9 game against Pennsbury, a game that the Knights won 38-0.

She has proven herself correct. So far this season she is perfect in seven field goal attempts, including two in last Friday’s game against Central Bucks East. She also connected on three extra points in the Knights dominating 33-14 victory.

But she has now proven that she can throw a mean hit on opposing returners as well, as the viral video demonstrates. 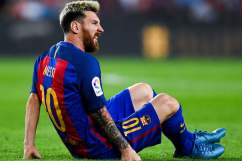