Leon Alexander learned his fate on Thursday for what he did to an 89-year-old woman in Columbus, Ohio, back in May of this year. But his horrific crime could have been a lot worse if not for an alert neighbor — and Alexander could have been prevented from breaking into the woman’s house at all if the state had done its job.

1. He Attempted to Rape an 89-Year-Old Woman in Her Home

At 4 a.m. on May 23, Alexander broke into the woman’s house on Denune Avenue in Columbus, waking her from sleep. According to police and witness accounts, the 45-year-old Alexander — armed with a knife as well as a box cutter — then dragged the woman into her dining room and tore off her clothes.

He also removed his own clothing and climbed on top of the woman, but was interrupted by the prompt arrival of the police.

Alexander also ransacked the woman’s purse and threatened to kill her.

Shirley Bolen, 75, a neighbor and friend of the 89-year-old victim, lives across the street from the home where the crime took place.

“The police came fast, I’m glad for that,” she told a local TV news station. “That’s all that saved her life. He told her, ‘I’m going to rape you and then I’m going to kill you.'”

“My son came running in the house hollering, ‘Mom! I think (her) house has been broken into!’” Bolen told WBNS TV.

“It looks like they’re dragging something through the house,” he told a 911 dispatcher, “and she can’t pick up nothing.”

Bolen said there had been a previous break in a few years earlier, and that since then, she insisted that her friend always leave a light on inside her home, even at night. It was that light that allowed Bolen’s son to see the crime in progress and ultimately, save his neighbor’s life.

Police showed up and Alexander attempted to run out of the house, but the officers caught up up to him and took him into custody.

3. The Victim Was Hospitalized but Survived the Trauma

The 89-year-old woman attempted to fight back against he much younger attacker, but he subdued her, biting her on each arm, which may have resulted in the woman’s arm breaking.

The victim was hospitalized but released the next day, though at the time she was reportedly still unable to walk. By the time of Alexander’s sentencing hearing on October 27, however, she had recovered well enough to confront him in a courtroom.

#developing: State loses track of parolee. Leon Alexander now accused of trying to rape 89yo in her home. @wsyx6 pic.twitter.com/fUrLjssYCR

A career criminal with a lengthy record of, primarily, robbery convictions, Alexander had been paroled from prison on his latest robbery rap only in January, less than five months before he attempted to rob and rape the 89-year-old woman. he had served four years this time.

But though legal authorities are supposed keep close tabs on paroled felons, somehow the state of Ohio simply lost track of Alexander. At the time he committed the attack on his 89-year-old victim, he was listed by the state as a “violator at large.”

Whether Alexander’s crime could have been prevented had the state not lost track of him remains uncertain. Alexander had spent 23 of the last 25 years of his life behind bars.

On Thursday a judge sentenced Alexander to another 21 years in prison, combining several sentences on various charges stemming from his May 23 attack on the elderly woman.

The sentences, some of which will run concurrently, included 11 years for aggravated burglary and another 10 years for being a repeat violent offender. He also received a seven-year bid for attempted kidnapping, 10 on an aggravated robbery conviction and six years for felony assault — with 11 months tacked on for possessing tools to commit a crime.

This time, Alexander was not allowed the possibility of parole, meaning that he will be 66 years old before he can go free again. On top of everything else, he was classified as a sex offender for the next 25 years.

Alexander turned to face his victim in the courtroom Thursday and asked for her forgiveness. But she refused to accept his apology. 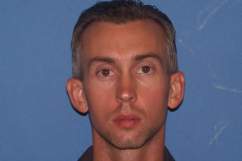