Hillary Clinton will make a stop in the critical swing state of North Carolina on Thursday with First Lady Michelle Obama.

It marks the first time that Obama will campaign with Clinton as the Nov. 8 election quickly approaches. Obama has become a valued campaigner for Clinton, who has spoken passionately against her Republican rival Donald Trump.

Last week Obama headlined a rally for Clinton in Arizona, a traditionally Republican state that Clinton hopes to win.

According to the Real Clear Politics average of statewide polls, Clinton holds a 2-point lead over Donald Trump in North Carolina, a state that 2012 Republican nominee Mitt Romney won.

On Thursday, Clinton and Obama will campaign jointly at Lawrence Joel Veterans Memorial Coliseum from 2 to 4 p.m. Doors open at 11:30 a.m. Those interested in attending the event can RSVP here.

The event was previously scheduled to be held at Wake Forest University’s Hearn Plaza.

“Clinton and Mrs. Obama will lay out what is at stake in November and urge North Carolinians to early vote to support the Clinton-Kaine ticket,” according to the Clinton campaign.

A victory in North Carolina is essential for Trump to win the presidency. Trump must capture a variety of swing states and North Carolina’s 15 electoral votes are crucial for him to have a chance of winning. 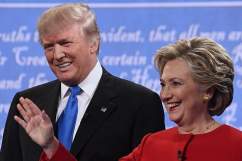