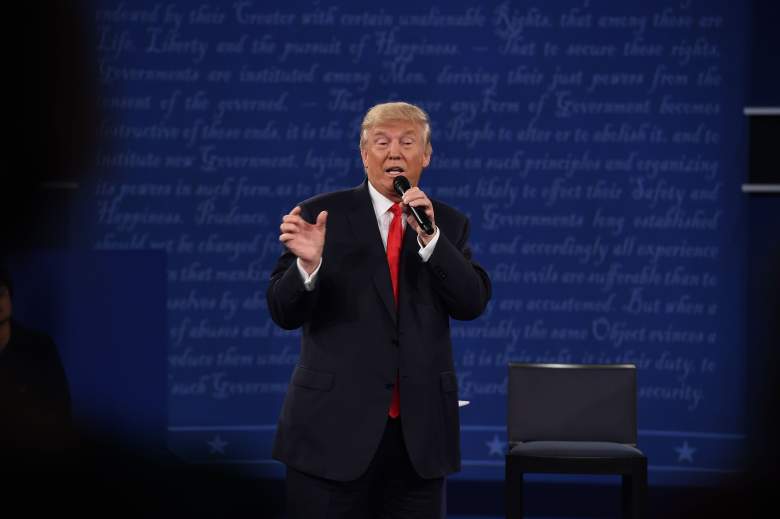 Donald Trump’s campaign has been reeling from the release of a 2005 video that revealed Trump speaking in lewd and demeaning terms about women with TV personality Billy Bush. In the recording, which was published by The Washington Post on Friday, the Republican candidate bragged he could kiss and grope women without their consent because he was a celebrity.

He then adds, “Grab them by the p—y. You can do anything.”

When Trump was pressed about the video during the second presidential debate on Sunday, he said he was “very embarrassed” by his comments, but also labeled it as “locker room talk.”

Trump on leaked video: "It's locker room talk, and it's one of those things. I will knock the hell out of ISIS" https://t.co/7thysozWCE

Although Trump quickly pivoted the discussion to ISIS, many took offense that the GOP nominee dismissed his sexually aggressive comments as locker-room banter. Comments that would be enough to constitute sexual harassment in the workplace.

As Fortune points out, an average worker would be fired for making similar comments:

It includes behaviors like “unwelcome sexual advances, requests for sexual favors, direct or indirect threats or bribes for sexual activity, sexual innuendos and comments, sexually suggestive jokes, unwelcome touching or brushing against a person,” among others. These can be made by a manager, a colleague, or a third party, like a client or customer.

Trump’s comments fall into several of those categories.

“I haven’t heard that one in any locker rooms,” Portland Trail Blazers’ CJ McCollum wrote in response to Crawford’s statement.

I haven't heard that one in any locker rooms https://t.co/Ci8NXOgFcI

As an athlete, I've been in locker rooms my entire adult life and uh, that's not locker room talk.

Others, such as SEC Network analyst and retired NFL player Anthony “Booger” McFarland questioned the comparison.

Has trump played sports ? So how did he know that was lockerroom talk ? Just curious

Plenty of people outside of the sports industry also shared contempt over Trump’s comments.

Doubling down on "locker room talk"?! Like all men do this?! Trumps words are an attack on women, this pathetic excuse is an attack on men.

locker room talk is not a harmless thing. it's the gas that propels rape culture.

The release of the 2005 video led to a fallout of major Republicans who publicly denounced and withdrew their support of the GOP nominee with some calling on Trump to quit the race.

Trump’s vulgar comments caused Speaker of the House Paul Ryan to disinvite him from an appearance they were scheduled to make together this weekend in Wisconsin.

CNN’s Anderson Cooper, who moderated Sunday’s debate, asked Trump if he ever treated women like he talked about on the tape.

Trump denied having touched or kissed women without their consent.