Scherzer has an overall record of 4-4 in the playoffs after taking a no-decision in Game 3, but has never won a game in the National League playoffs. If he can get the Nationals through, they’d reach the NLCS and win a playoff series for the first time in franchise history.

Here’s what you need to know about Scherzer.

1. He Led the National League in Strikeouts This Season

One of Scherzer’s best qualities throughout his career has been his ability to miss bats. For the second consecutive year, Scherzer was the best in the National League at striking out hitters, fanning 268 on the year despite throwing 28 fewer innings than he did a season ago. He finished with a career-high of 12 strikeouts per nine innings pitched, marking the sixth straight year that he’s averaged better than a strikeout per inning.

But his numbers go beyond simply getting batters to not make contact. He’s also the league leader in WHIP, holding opposing offenses to just 0.902 walks and hits per innings pitched. He finished with fewer than six hits allowed per nine innings for the first time in his career and his WAR — the advanced sabermetric stat “Wins Above Replacement” — of 7.6 not only rated Scherzer as the most valuable pitcher in the National League, but had him tied with outfielder Giancarlo Stanton of the Miami Marlins as the most valuable player in the entire league.

Scherzer was picked in the first round of baseball’s 2007 draft, 11th overall, out of the University of Missouri by the Arizona Diamondbacks. He made his big league debut with Arizona the following year. But following the 2009 season, the Diamondbacks sent Scherzer to the Detroit Tigers as part of a three-team, seven-player trade.

He pitched for the Tigers for the next five years, helping Detroit reach the postseason in all five of those seasons — and to get all the way to the World Series in 2014, where they lost to the San Francisco Giants. Scherzer won 21 games in 2013 and 18 the following year. But after 2014, Scherzer became eligible for free agency and spurned a $160 million offer to re-up with Detroit.

Instead, he inked a seven-year, $210 million pact with the Nationals, the largest in their history and the second-highest ever for any pitcher, behind the Dodgers’ Clayton Kershaw. David Price surpassed Scherzer, though not Kershaw, when he signed with the Red Sox in the 2016/2016 offseason.

But Scherzer’s contract is heavily weighted toward the back end. He’s still making an eight-figure salary, but his salary is held to $15 million per year through 2018. In 2019, however, his salary is scheduled to jump to $35 million per year in each of the final three years of his contract. His deal will make him the highest-paid player in the game, and that’s without counting his $50 million signing bonus, which was spread out across the life of the contract.

Per the terms of the deal, the Nationals will be paying Scherzer through the year 2028 after deferring over $100 million of his contract. However, having his salary deferred hasn’t hurt Scherzer’s earning potential. He’s still managed to amass a net worth of an estimated $50 million.

3. His Eyes Are Two Different Colors

Did you know that @Nationals pitcher Max Scherzer (@Max_Scherzer) has 2 different colored eyes? One is blue and the other brown! #OnePursuit pic.twitter.com/fSPQ9ofabE

In addition to his extraordinary pitching talent, Scherzer has another distinguishing characteristic — he was born with a condition known as heterochromia iridium — a genetic trait that causes each eye to be a different color. Scherzer has one blue eye, and one brown eye.

“He was 4 months old. I looked down at my baby, and he had a blue and green eye. Very clearly. I have pictures and everything,” his mother Jan, said in a 2005 interview. “I took him to the pediatrician shortly after that, and he said, ‘They may go back and forth. They may change again this year.’ As the year went on, the blue eye got bluer, and the green eye changed to brown.”

Scherzer’s eyes have long been a defining feature, so much so that the Nationals began selling M&M’s in blue and brown in honor of Scherzer’s heterochromia. Other famous people who have the same condition include actors Christopher Walken, Kate Bosworth and Jane Seymour.

4. He Dedicates His Starts to His Late Brother

Getty
Washington pitcher Max Scherzer keeps his brother in mind in every start.

Alex Scherzer, who was four years younger than Max, suffered from clinical depression, committing suicide in 2012 at the age of 24. He was Max Scherzer’s only brother and the two were extremely close. In fact, Alex — an economics major at the University of Missouri — played an integral role in his older brother’s career, introducing Max to sabermetrics — the use of advanced statistics to analyze a player’s performance.

“He got me into that type of thinking,” Scherzer told MLB.com in an interview shortly after Alex’s passing. “I remember arguing with him, ‘There’s just no way that can be right.’ You only see baseball from the mound. You never thought you could put a number on it or evaluate it from a different angle. And yet, probably for a year, he kept chipping away at me and saying, ‘See? Look at this. I called it.’ Finally, I was like, ‘You’re onto something.’

“There were some other driving forces to what makes a successful pitcher beyond just the normal scouting reports, executing pitches and all that. That was a part of the game that we shared, to have that type of mind to be able to see it from both sides. No one way is right. That’s I think what he brought to me.”

5. Scherzer is Often Mistaken for Jewish, But He’s Not

The name “Max Scherzer” is often mistaken by fans as indicating that the Nationals pitcher is Jewish, which would make him one of only nine Jewish players to play in the Major Leagues in 2016. Even a 2012 article in The Jewish Journal newspaper identified Scherzer as Jewish.

But Scherzer is not Jewish, according to an article in The Washington Post last year.

In fact, the name Scherzer is of German origin and could mean “jester” in German, or it could be the name of a family that traces its ancestry back to Scherz, a tiny town in Switzerland. 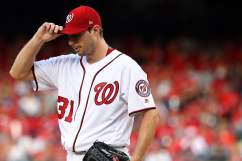