Republican presidential candidate Donald Trump has been taken to task by his opponent, Democrat Hillary Clinton, throughout the campaign for his derogatory remarks about women and their appearance — a history of remarks which reached a crescendo last week with the release of a 2005 recording in which Trump is <a href="http://” target=”_blank”>heard making crude boasts about sexually assaulting and forcing himself on women.

The highly publicized remarks appear to have taken a toll on young girls in particular. In an interview on Thursday, Indiana Governor Mike Pence, Trump’s vice-presidential running mate, was asked to respond to one such young girl who said that Trump’s remarks made her feel bad about herself. His response raised eyebrows among campaign observers.

Watch Pence answer the question starting at the six-minute mark in the following video, an interview with anchor Scott Light of WBNS-TV News in Columbus, Ohio.

“There was an 11-year-old girl who told our staff, and she said this completely unsolicited, she was talking about Donald Trump’s words in campaign commercials,” Light said, according to a transcript obtained by NBC’s Vaughn Hillyard. “She said this: ‘When I hear those words and look in the mirror, they make me feel bad about myself.’ And again, she said that totally unsolicited. What would you say to that little girl?”

And here was Pence’s response.

“Well, I would say to any one of my kids and any children in this country that Donald Trump and I are committed to to a safer and more prosperous future for their family,” Pence replied. “The weak and feckless foreign policy that Hillary Clinton promises to continue has literally caused wider areas of the world to spin apart. The rise of terrorist threats that have inspired violence here at home, and we’ve seen an erosion of law and order in our streets.”

But Pence was not finished answering the pre-teen girl scout who said that her self-image has already been damaged by Donald Trump. Here’s how he concluded his answer.

“I would say to any of our kids that if Donald Trump and I have the chance to serve in the White House that we’re going to work every day for a stronger, safer and more prosperous America.”

Pence’s startling pivot to his campaign’s national security message contrasted sharply with how Clinton responded last week when at a campaign appearance, a 15-year-old girl asked her, “At my school, body image is a really big issue for girls my age. I see with my own eyes the damage Donald Trump does when he talks about women and how they look. How would you undo some of that damage so [girls] understand they are so much more than just what they look like?”

Watch Clinton’s response in the video below.

In Pence’s interview with Light, he also defended Trump from accusations made by several women that he sexually groped, touched or kissed them without their consent, often in public situations.

“I can say with certainty that Donald Trump has denied any of those actions that have been alleged have ever occurred, and I believe him,” Pence said. 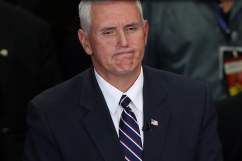