Since Donald Trump started his campaign for the White House, his Hollywood Walk of Fame star has been the victim of several pranks, but none have been so extreme as what one vandal did early Wednesday morning. Video posted by Deadline shows a man using a pickax and sledgehammer to completely destroy the star. The Hollywood Chamber of Commerce has confirmed that the star will be replaced.

The man told Deadline that his name is Jamie Otis, who was dressed as a construction worker. He said he wanted to auction off pieces of the star to raise funds for women who have accused Trump of sexually assaulting them. Since the release of a 2005 tape in which Trump describes how he can have any women he wants because of his fame surfaced, nearly a dozen women have accused trump of sexually assaulting them.

Trump was honored with the star in 2007, when The Apprentice was at the height of its popularity. It is located at 6801 Hollywood Blvd., near the Dolby Theatre. Otis completely destroyed the letters that show Trump’s name and also removed the TV logo used for stars honoring TV personalities.

Otis began dismantling the star at 5:45 a.m., but by the time Los Angeles Police officers arrived at the scene 45 minutes later, Otis was gone. The Chamber of Commerce, which organizes the Hollywood Walk of Fame stars, issued the following statement:

Police told the Hollywood Reporter that there is an open vandalism investigation.

In a follow-up interview with Deadline, Otis said that he will “gladly pay the money if I have to and if I must go to jail, I will” for his actions on Wednesday. If convicted, Otis could face up to three years in jail and over $10,000 in fines. He also debated turning himself in, adding that he will be “happy to go to trial.”

“I will have to face justice and hope it goes in my favor,” Otis told Deadline.

Otis also sent a video to TMZ, essentially repeating his statement to Deadline. He will take the heat for what he’s done. He’ll likely be charged with a felony, since the Hollywood Chamber of Commerce says the plaque is worth $30,000.

The LAPD has confirmed to The Wrap that they arrested a man on suspicion of felony vandalism. However, he will not be officially identified until he’s booked. 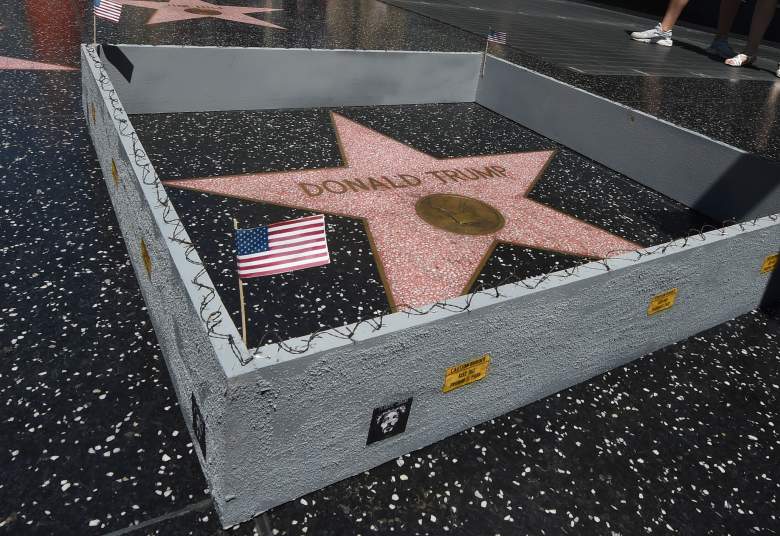 In July, an artist put a wall around the Trump star. (Getty)

The Trump star has been vandalized before. In July, an artist placed a wall around it, in reference to his proposed wall along the U.S.-Mexico border.

In January 2016, someone drew a swastika on Trump’s star, although it was cleaned hours after it was discovered.

Loading more stories
wpDiscuz
15
0
Would love your thoughts, please comment.x
()
x
| Reply
Donald Trump's Hollywood Walk of Fame star was destroyed by a man who claims he wants to auction off pieces to raise money for victims of sexual assault.