A white truck plowed into a group of people protesting Columbus Day in Reno, Nevada as part of Indigenous People’s Day. Watch above.

Several people captured the dramatic and disturbing scene on video. The video above captures the protest for several minutes, and the truck appears in it toward the end. Here’s a shorter version capturing just the tail end of the video:

Some of the protesters carried No Dakota Access Pipeline posters. “We were invaded. We were not discovered!” a woman shouted.

MyNews4 says one protester was taken to the hospital as a result of the October 10 incident. According to Fox News, “about 40 people were blocking Virginia Street in front of the city’s famous arch” when the incident occurred.

The injuries were not life-threatening. “Protesters said a man in a truck was harassing them earlier, and when they gathered on a crosswalk under the Reno Arch to a take a photo, the truck driver wanted to get through,” said MyNews4.

One emotionally upset woman said in a Facebook Live streaming video that the protesters were marching to protest the “injustices caused by Columbus Day” as part of Indigenous People’s Day.

The woman who streamed the video began crying during it and said:

There was a truck that came, and this truck didn’t have their lights on… and they were in front of our people. They were there, standing in front of us, trying to be threatening, and they were revving up their engine, and we stood our ground…they just kept going, and they just stepped on the gas, and we had protesters who were hit in this peaceful gathering here in Reno.

Two men intentionally ran over peaceful protectors who were demonstrating #IndigenousPeoplesDay in Downtown Reno. This is attempted murder! pic.twitter.com/lTf0qD9nbF

KOLO 8-TV said the protest was put on by the American Indian Movement of Nevada. The TV station quoted police as saying, the protesters were blocking traffic in the crosswalk when “a car started edging toward them. This turned into a heated confrontation and the pickup eventually drove through the group of protesters.” 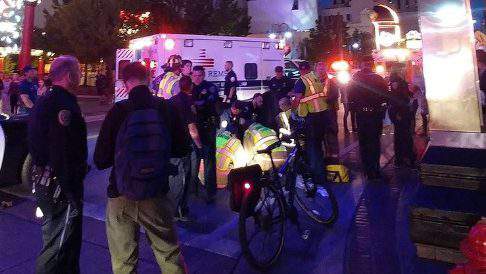