South Carolina Governor Nikki Haley announced a state of emergency for her state and plans for about 1.1 million people to be evacuated from coastal areas ahead of Hurricane Matthew.

While the path of the powerful storm, which was slamming into Haiti and headed for Cuba Tuesday evening as Haley made her announcement, is not entirely known, South Carolina is taking every precaution, the governor said.

“I know the first thought is well maybe this storm will shift … I hope that too, but you don’t want to get caught in this,” Haley said, according to The State newspaper. “When we’re looking at surges this high and we’re looking at winds at this level, this is not something that we want to play with. … If you don’t get out in time, you might get stuck.”

A map of the evacuation zones can be seen above. Lane reversals and other plans will be put into place Wednesday. Schools in the areas under evacuation will not be in session starting Wednesday, Haley said.

You can watch Governor Haley’s press conference about the state of emergency and evacuations below:

The counties where schools and government buildings will be shut down are:

The state of emergency will begin Thursday morning, Haley said.

Hurricane evacuation routes can be seen below:

The state will continue to provide updates on Hurricane Matthew here. 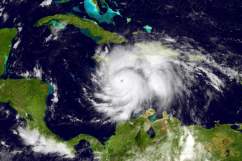 Hurricane Matthew in Haiti: The Videos You Need to See