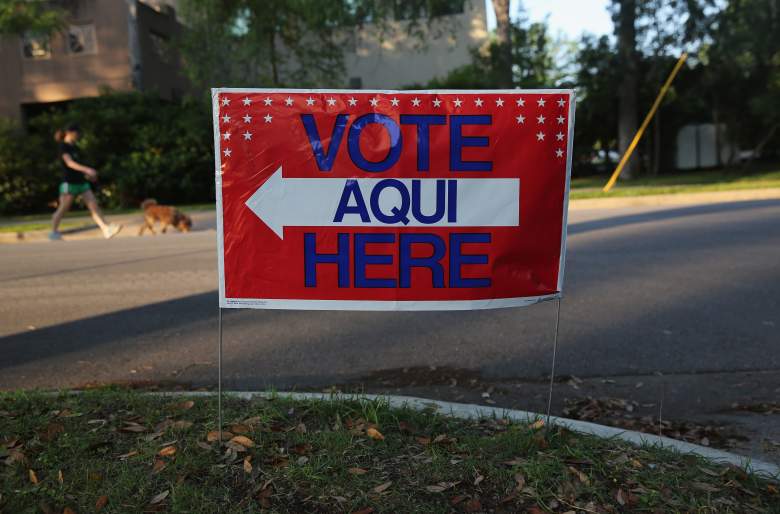 A bilingual sign stands outside a polling center at public library ahead of local elections on April 28, 2013 in Austin, Texas. (Getty)

Early voting is underway all over the country and, surprisingly, there’s actually some question over who will wind up winning Texas. The overwhemingly liklihood is that Donald Trump will secure the state, winning it just as every Republican has done since 1980. But Hillary Clinton is shockingly close in the polls, and FiveThirtyEight gives Clinton a better chance of winning Texas than it gives Trump of winning Pennsylvania.

Even though Clinton’s chances of winning Texas are still low, taking a look at these early voting results still gives us an idea of how enthusiastic voters on both sides are, as well as if there’s any sign of the state beginning to turn blue in a way that might affect the next few elections.

If you’re a Texan who wishes to vote early, the early voting period lasts from October 24th through November 4th. To find your polling location and its hours, head on over to the Texas Secretary of State’s website.

On October 25th, the second day of 2016 early voting, an additional 600,000 people voted, bringing the total so far up to 987,000, or ten percent of the state’s voting population. This is an increase of roughly 342,000 votes from the second day of early voting in 2012, and by that point four years ago, only seven percent of the state’s population had cast a ballot. Texas has not yet released its numbers for October 26th.

Of the 15 counties for which early voting information has been made available, the average county has seen an increase of votes cast of 53.9 percent. The state does not release information about how many Democrats and Republicans voted. But there are seven counties where the spike is higher than the average of 53 percent, and of those seven counties, five voted for Barack Obama in 2012. Of the counties that voted for Obama in 2012, there has been an average increased number of votes of 64.7 percent, but of the counties that went for Mitt Romney, the average increase has been 44.5 percent. This all suggests that Texas Democrats may be much more enthusiastic than usual this year.

By far the biggest spike has been in Travis County, which is extremely Democratic and which voted for Barack Obama in 2012. Travis County has seen an increased number of votes of 119 percent, with about 46,000 more people voting early there than did by this point in 2012.

Here are the early voting statistics for this year, taking into account votes cast both in person and by mail on October 24th and October 25th.

Loading more stories
wpDiscuz
10
0
Would love your thoughts, please comment.x
()
x
| Reply
Many Texans have already cast their ballot in the 2016 election, and so far, the turnout has been greater in Democratic counties than in Republican counties.