While Hillary Clinton has been described, including by President Barack Obama himself, as the “most qualified” presidential candidate in United States history, one item on her lengthy resumé has been largely forgotten by today’s American electorate.

Hillary Clinton is a Grammy Award winner. But why did she win a Grammy, and when?

Clinton Won the Award When She Was Still First Lady

In 1996, Clinton published her first book, It Takes a Village: And Other Lessons Children Teach Us. At the time, she was First Lady of the United States. Her husband, President Bill Clinton, would win re-election later that year. The book was a hit, going on to sell 450,000 hardcover copies and 200,000 of the paperback edition, riding the New York Times bestseller list for 18 weeks including three at Number One.

Of course, It Takes a Village also came out in an audiobook edition — as a CD and cassette in those days, rather than a download. Rather than hire a professional actress to read the audiobook, the publishers hired Clinton herself to record the text.

She must have done a pretty good job, because in 1997 Clinton won the Grammy Award for “Best Spoken Word” recording — beating out Garrison “Prairie Home Companion” Keillor’s reading of the classic Huckleberry Finn, as well as a biography of President Harry Truman read by an all-star acting lineup of Lauren Bacall, Martin Landau, Jack Lemmon & Gregory Peck.

Would Clinton be the First President With a Grammy?

If Clinton wins the presidential election in November, she will not be the first president to take office with a Grammy Award already under her belt. One other president and two former presidents have also been Grammy Award Winners — all in the “Spoken Word” category.

• In fact, Clinton’s own husband, Bill Clinton, still has Hillary beat in the Grammy department, with not one but two. But he won his Grammys after his eight years in office were over. In 2004, he won a Grammy for his reading of Wolf Track, a new version of the fairy tale “Peter and the Wolf.” Clinton won again the next year, 2005, for his audiobook version of his autobiography, My Life.

• Barack Obama, the current president, also has two Grammy trophies on the White House mantle. Obama won both of his Grammy Awards before he took office. Obama won his first Grammy for the abridged audio version of his 1995 memoir, Dreams From My Father, which was reissued along with an audiobook version when Obama was first considering his run for president in 2006. In 2008, he won again for reading his sequel to Dreams, his political autobiography The Audacity of Hope. It was a big win, because Obama had to beat out two former presidents, Clinton — nominated for his third Grammy — and Jimmy Carter.

• Speaking of Jimmy Carter, the now 92-year-old who was elected president in 1976 only to lose re-election to Ronald Reagan four years later, won his first and only Grammy at the youthful age of 83, in 2007, for the recording of his book, Our Endangered Values: America’s Moral Crisis. 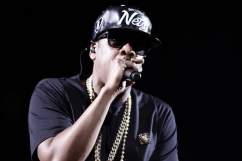 Jay-Z To Give Concert for Hillary Clinton in Ohio: Report

Read More
2016 Presidential Campaign, Grammy Awards, Hilary Clinton
wpDiscuz
0
0
Would love your thoughts, please comment.x
()
x
| Reply
How many people know that Hillary Clinton is a Grammy Award winner? But if elected, will she be the first president with a Grammy?