The scene of the shooting in Azusa, California. (Marco Soto/Twitter)

Multiple people have been shot, including at least one who was heading to vote, in an “active shooter” situation near a polling place in Azusa, California, police and witnesses say.

One of the victims was going to vote when he or she was shot, a law enforcement source told the Los Angeles Times.

“It’s very early to tell what the motive is, but it appears to be concentrated on the residential side, not at the polling station,” Azusa Police Chief Steve Hunt said it at a press conference.

The Memorial Park polling place located near the scene of the shooting has been locked down, people inside said on Twitter.

The shooter has not been taken into custody. According to Fox LA, there are reports of gunfire being exchanged between police and the suspect.

Officers were “met by gunfire,” at the scene, KABC-TV reports.

There's an active shooter in my city and at my old middle school pic.twitter.com/kmxT45jwj3

Several roads were closed near Fourth Street and Orange Avenue, according to KABC.

This story is still breaking and it will be updated as more information is made available. Here is what we know so far:

1. A Witness Says There Was an Active Shooter With a High-Powered Rifle

A witness said on Twitter that there was a report of an “active shooter with a high-powered rifle,” in the area of the shooting scene.

The shooting was reported in the residential neighborhood about 2 p.m. local times, according to the Times.

At a press conference, police said the shooter was a woman equipped with an assault rifle capable of firing rapidly. 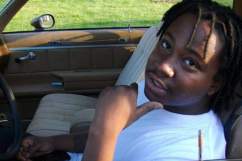 2. There Are Conflicting Reports About the Shooter & Police Say There May Have Been More Than One

#BREAKING Azusa, multiple people shot (reports up to 5) in a neighborhood near Orange Ave and 4th street. pic.twitter.com/ajqI6Nqdds

There are conflicting reports about the shooter. Police have said they were dealing with a female shooter armed with a high-powered rifle.

But witnesses told reporters they saw a man with a gun. Police said at a press conference it is possible there were two shooters, the woman and a man.

A witness, Roberto Chavez, told the Los Angeles Times he was outside when he saw the heavily armed gunman open fire at a group of people, firing at least 10 rounds. He said the shooter, who wore a white shirt and black pants, ran about three doors down from him after the shooting.

Chavez, 67, told the newspaper he recognized the man as someone who frequently visits the area and hangs out at his neighbor’s house. He said he thinks the victims were his neighbors. He told the Times he does not know the man’s name.

No other information about the shooter has been released, including a possible motive, and there has not been any connection made to the polling place or the election.

3. The Gunman Fired At Least 20 Shots at Police Before Retreating Into a House After Officers Returned Fire

Police were fired upon by the shooter, according to authorities. The officers returned fire.

Officers were pinned down at the scene and had to be rescued by other officers in an armored Bearcat vehicle, according to police scanner reports. None of the officers were injured.

The shooter was surrounded after retreating into a nearby house, the Los Angeles Times reports.

Police are now treating it as a barricade situation.

A heavy police presence was reported at the scene, including Azusa Police. The West Covina Police is also at the scene.

The Los Angeles Sheriff’s Department also said it was sending units to the area.

4. A Polling Place & a 2 Nearby Schools Were Put Into Lockdown

THERE HAS BEEN A SHOOTING OUT SIDE OF MEMORIAL PARK'S VOTING POLL. I'M CURRENTLY ON LOCKED DOWN. pic.twitter.com/oHbMS3R4my

A polling place was put into lockdown, according to voters inside the building. The polling place is located at the Memorial Park recreation center at 320 North Orange Place.

In lockdown at the polling place in Azusa due to police shooting outside. Crazy voting story!

The Dalton Elementary School polling place was initially affected by the shooting, officials said, but it was not clear if it was in lockdown. It is now open and fully functional.

“Voters should avoid the area and, if necessary, cast a ballot at an alternate polling location. Updates to follow,” the Los Angeles County Registrar said on Twitter.

Two nearby schools, Slauson Middle School and Mountain View Elementary , have also been locked down. Neither are being used as polling places.

“As a result of police activity, Slauson Middle School and Mountain View Elementary School have been placed on lockdown. Until further notice, all students and staff will be kept on campus in locked classrooms,” Azusa Unified School District Superintendent Linda Kaminski said in a statement. “Azusa Unified personnel are actively communicating with parents and working with authorities to ensure that both schools are secure. We are asking that students, parents and staff stay clear of the area until the lockdown is lifted.”

Multiple scenes in the Azusa shooting- this 3 car wreck is also part of the investigation. pic.twitter.com/9krkmmY5V3

It is located in Los Angeles County, about 25 miles east of the city of Los Angeles.

Police have told residents to shelter in place.

“Critical Incident: Please stay out of the area of Fourth St & Orange Ave. All residents in the area shelter in place,” the department said on Twitter. 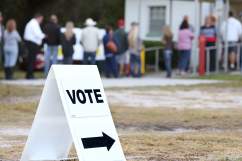 Loading more stories
wpDiscuz
2
0
Would love your thoughts, please comment.x
()
x
| Reply
One person has been killed and at least three others shot by an "active shooter" near a polling place in Azusa, California. The gunman remains at large.