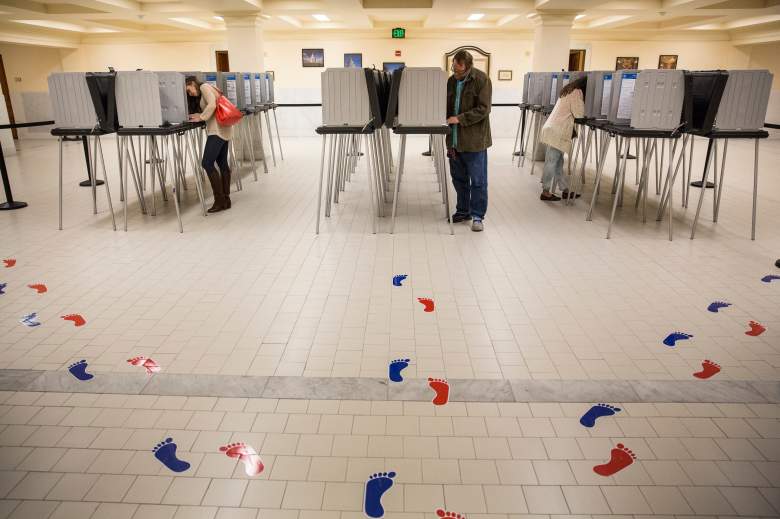 People vote in the California primary on June 7, 2016 at City Hall in San Francisco, California. (Getty)

California voters will head to the polls Tuesday to cast votes for federal and state offices. In addition to the contentious presidential race, the ballot also features a U.S. Senate race, a Congressional race in each of the state’s 53 districts, and state legislative races.

REGISTRATION GUIDELINES: Californians must be registered to vote at least 15 days before Election Day. California does not offer same-day registration. If you’re unsure whether you’re already registered, you can check your status via the state’s registration lookup tool.

TRACKING RESULTS: There are a number of ways to track results. The California Secretary of State’s website will be posting results. Politico will also post state-by-state results online, you can find California’s results here.

WHAT’S AT STAKE IN FEDERAL RACES: Hillary Clinton is favored to carry the state’s 55 electoral votes. If Clinton wins the state, it would mark the seventh consecutive time the Democratic nominee has done so. The state has voted Democratic in the last six presidential elections, dating back to 1992.

California voted for President Obama in both 2008 and 2012, when the president won the state by 23.1 percentage points.

Kamala Harris and Loretta Sanchez, both Democrats, are battling for the California Senate seat currently held by Barbara Boxer (D).

California has 53 members in the House of Representatives, 39 Democrats and 14 Republicans. Every House seat is up for re-election. Click here for a map of the state’s congressional districts.

WHAT’S AT STAKE IN STATE RACES:

The Democratic party also holds the majority in the House with 52 of 80 seats. All 80 seats in the California State Assembly are up for election in 2016.

The next California governor’s race isn’t until 2018. Jerry Brown (D) has served as governor since 2011.

Loading more stories
wpDiscuz
0
0
Would love your thoughts, please comment.x
()
x
| Reply
California voters will head to the polls Tuesday to cast votes for federal and state offices. Here's what you need to know before going to the polls.