The ABC News/Washington Post national tracking poll now has Donald Trump pulling ahead in a race that's been about even in recent days!!! pic.twitter.com/FfiNhqGBfP

Donald Trump has broken into a 1 percentage point national lead in a new 2016 presidential poll from ABC/Washington Post.

The poll, released November 1, is raising eyebrows for two reasons: First, it shows Trump ahead in the wake of the FBI letter controversy, although the slim lead is in the margin for error, meaning the race is virtually tied. Secondly, the poll has registered a dramatic double-digit shift in voter sentiments in just over one week in favor of Trump. The poll showed Trump behind Hillary Clinton by 12 points from October 20-23 (it measures four-day rolling averages). A polling chart (above) shows that Trump hasn’t led in the poll before, even all the way back to June.

That has people wondering: Is the poll credible? How could the shift be so large? (Answer: The big shift is an aberration compared to other national polls but so was the 12-point Trump deficit a week ago. However, the close margin is not that far off from some other national polls, and the general tightening of the race has also been seen in many other polls). On November 2, the same poll showed the race tied.

Hillary Clinton’s campaign has responded by criticizing the poll. A top Clinton aide called the poll “bad polling,” according to Politico, and said, “Sorry. It’s just not what we see at all; it’s not what other people seem to have. There just seems to be something about that model that seems off.” The aide admitted polls have tightened, though, arguing it’s because more Republicans are supporting Trump, said Politico.

Even some Trump supporters, like Newt Gingrich, are hesitant about the poll because of the dramatic shift it registered. Gingrich called the poll an “absurdity.”

Washington Post-ABC poll is an absurdity. Trump has not moved up 13 points in the last 8 days.he was NEVER 12 points behind. Ignore polls

Some analysts don’t find the shift credible, either, because it’s so large. The dramatic shift wasn’t found in other polls. For example, a NBC News/Survey Monkey tracking poll over the same period “has shown virtually no change and still has Clinton up by 6 points,” noted one CNBC analyst, who advises Democrats to stop “freaking out” over the numbers because “Trump is in a better position than he was a week ago. But his path to victory next week remains difficult if not flat out impossible.”

YouGov argued, “We believe that most of the bounces seen in surveys this year represent sampling noise that can be reduced or eliminated by adopting by better statistical methodology.” YouGov added that “apparent swings” might be “due to differences in sample composition.”

However, Fivethirtyeight does give the poll itself an A+ overall rating.

No other poll has measured such a shift as ABC/Washington Post, but the 12-point Clinton lead of just over a week ago was also an anomaly. It’s safe to say that the race is tightening nationally, but only Washington Post/ABC found such a big shift. When it’s compared to polling averages and other recent polls, the margin itself is not wildly off, however. The race is close in national polling, and in some polls, it’s in the margin for error (as Washington Post/ABC showed). Thus, it’s possible it was the 12-point Clinton lead that was in error, not the recent close margin.

Of course, it will ultimately come down to Electoral College math, and Clinton leads in a series of battleground states. Fivethirtyeight gives Clinton a 71 percent chance to win the Electoral College based on how the state polling is shaping up.

See different pathways for each candidate for electoral college victory here. The breakdowns show how formidable the math is for Trump even with the tightening in the polls.

Fivethirtyeight has an informative chat with political experts who opine about what the shifts in polling mean – in multiple polls, not just the ABC/Post one. The Fivethirtyeight political experts argue that Clinton is still in the strongest position to win the Electoral College, but that the polls have tightened. They say a few more points shifting toward Trump in national polling would put her in a much more perilous position, that polling in some battleground states is old or not very reliable, and that turnout will matter, especially of African-American voters. If the latter is down, that’s bad for Clinton.

Trump, who previously claimed polls were “rigged” against him, is touting the Washington Post/ABC poll.

Wow, now leading in @ABC /@washingtonpost Poll 46 to 45. Gone up 12 points in two weeks, mostly before the Crooked Hillary blow-up!

According to The Washington Post, the poll has found a drop-off in enthusiasm among Hillary Clinton voters since the release of the letter by FBI Director James Comey. Comey’s letter said that the FBI would review a new cache of emails discovered on a device (owned by former Congressman Anthony Weiner) to see whether the emails on it are related to the agency’s earlier investigation of Clinton. Clinton’s team and others have sharply criticized Comey’s decision to release the letter 11 days before the election, a decision he made against the advice of Attorney General Loretta Lynch.

Specifically, the ABC/Washington Post poll found Trump at 46 percent and Clinton 45 percent in a race that included Libertarian candidate Gary Johnson and Green Party nominee Jill Stein. Voter impressions were measured Thursday through Sunday, October 30. One thing that might help Clinton: One-fifth of voters said they had already voted, said The Post. Early voting from throughout the country has favored Clinton in some states.

The poll was conducted by telephone October 27-30 among a random national sample of 1,773 adults including landline and cell phone respondents. The margin for error is plus or minus 2.5 points.

Some voters are worried.

@profblmkelley I'm so depressed. He's ahead now in the latest ABC News and Washington Post poll. :(

A battleground state poll also conducted by The Washington Post found Clinton up 6 points in Virginia, though, which is normally a red state but is the home of Clinton running mate Tim Kaine. The poll was conducted over the same time frame as the national poll and “showed that Clinton actually polled slightly better in the two days after Comey’s bombshell announcement than she did before,” said Politico. You can read more details on other recent battleground state polling here. 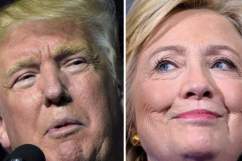