Wisconsin Governor Scott Walker introduces Donald Trump at the beginning of the rally. Upon taking the stage, Trump said that Walker has done a “fantastic job” for the state of Wisconsin. (Getty)

Wisconsin is a battleground state that Donald Trump is actively competing for, but a new poll shows Hillary Clinton with a comfortable lead just a few days from the 2016 presidential election.

The poll did find an erosion in Clinton’s support after the release of the FBI director’s letter to Congress, but she was so far ahead right before the letter that she retains a solid lead. Trump has recovered some of the standing he lost in the polls after the release of his comments about women to Billy Bush, but he has a ways to go with a few days left.

The Marquette University Law School poll is one of the most watched polls in Wisconsin, and it’s widely considered one of the most credible. A Remington poll taken October 30, in the same time frame as the Marquette poll, found Clinton leading Wisconsin by 4 percentage points. Clinton leads in Wisconsin by 5.4 percentage points in the RealClearPolitics polling average from October 26-31. She leads in national polls in the RealClearPolitics average by only 1.9%, an edge that has shrinking daily in recent days.

Battleground state polling is tightening for Trump in a host of states (such as Nevada, Colorado, and North Carolina), and in some national polls. The most recent poll out of Colorado, for example, now shows the race there tied.

In Wisconsin, though, Republican Senator Ron Johnson – in a grudge match with former Senator Russ Feingold – is outperforming Trump in the new Marquette poll. The Johnson/Feingold numbers are interesting because Feingold had comfortably led in that race throughout the summer, and the seat could determine control of the United States Senate. As a result of the race’s new closeness, last-minute funding has flowed into Wisconsin. The Wisconsin State Journal said “Americans for Prosperity, backed by the billionaire Koch brothers, and Reform Wisconsin Fund, a super PAC funded by a group bankrolled almost entirely by Afton billionaire Diane Hendricks” are behind some of the last-minute spending.

Here’s what the Marquette poll showed for both races:

Six percent of respondents in the poll were undecided or not voting or wouldn’t say, according to the poll. Clinton was ahead by 7 percentage points in the last Marquette poll in early October.

Feingold was ahead by 2 percentage point in the last Marquette poll.

Other interesting findings in the latest Marquette poll:

Trump has been actively competing in Wisconsin. He appeared in the Republican stronghold of Waukesha, Wisconsin in late September, and told the crowd that former Republican Governor Tommy G. Thompson had advised him to come back to the state because the polls had narrowed somewhat. Trump was poised to appear with a slate of top Republican officials in Wisconsin but that didn’t happen after the release of the Billy Bush tapes that showed Trump making lewd comments about women. That show of support could have made a difference as the polls had tightened at that stage.

On Tuesday, Trump appeared in the northwestern Wisconsin city of Eau Claire alongside Republican Governor Scott Walker. House Speaker Paul Ryan, who is also from Wisconsin, did not appear in Eau Claire but told local television he voted for Trump. Eau Claire has the added benefit to Trump of being only a few hours drive from Minnesota, which is another state he’s trailing in but would like to upset (Minnesota has not had recent polling). Trump mentioned Minnesota during his speech, in which he railed against Obamacare. 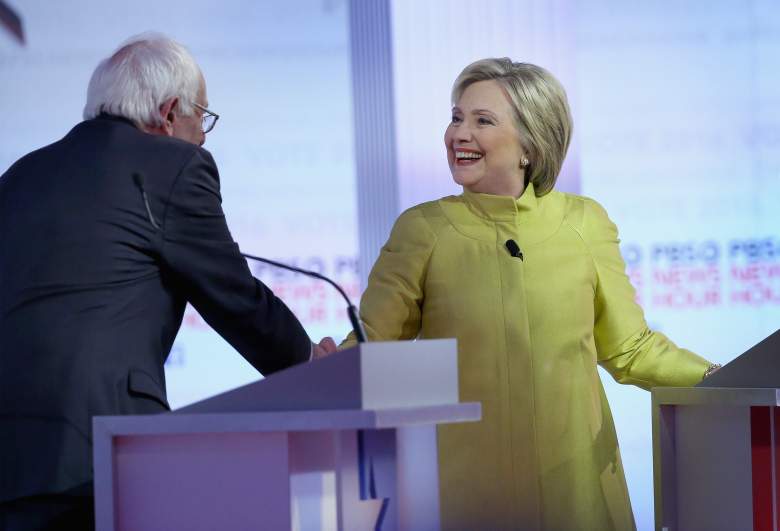 Bernie Sanders and Hillary Clinton during the Democratic debate that was held during the primary in Wisconsin. (Getty)

Wisconsin is an unusual state; in recent elections, it’s elected Democratic presidents, but the top state officials are Republican. The governor, attorney general, and both houses of the Legislature are Republican-controlled. This speaks, at least in part, to the turnout differential between the midterm elections and presidential years.

To win Wisconsin, Trump needs a large turnout gap between Democrats and Republicans (and independents to break his way). Specifically, he needs to drive up turnout to the extremely high levels in the suburban counties that ring Milwaukee County that helped elect Scott Walker. However, Trump has been hobbled there somewhat by the fact conservative talk radio – which is very powerful in those so-called “WOW” counties – has not been unified in support of Trump. Conservative talker Charlie Sykes is one of the country’s leading Never Trump voices. Furthermore, Trump does less well among affluent, college-educated Republicans than working-class rural voters. This schism was found during the primary, when the WOW (Waukesha, Ozaukee, and Washington counties) went for Ted Cruz, but Republicans from other more rural areas of the state supported Trump.

It could also be argued that, if there is one in a monolithic sense, Wisconsin is the epicenter of the “GOP establishment.” After all, in addition to Ryan, Republican National Committee Chairman Reince Priebus hails from the state.

One wildcard that could help Trump: The Johnson race, if the get-out-the-vote efforts for him and heavy campaign spending turn out more voters who then select Trump.

Wisconsin is not necessary for Trump to find a pathway to an electoral college victory. But, in addition to running the tables in swing states that are currently tied or almost tied (like Florida and Ohio), he’s going to need to flip a state where Clinton has had a comfortable lead (at least until now) into his column to make the math work. That means a Wisconsin, Colorado, Pennsylvania, Minnesota, or Michigan would go a long way to helping Trump find a way to victory. The tough electoral college odds are why sites that forecast the election are still predicting a Clinton victory in the electoral college, although the polls are also tightening nationally. If they tighten more over the next few days, it will get even more interesting.

Loading more stories
wpDiscuz
2
0
Would love your thoughts, please comment.x
()
x
| Reply
Hillary Clinton has a comfortable lead in Wisconsin in the latest 2016 presidential polls in that battleground state.