Yes, the polls are tightening, including in critical battleground states. Yes, every time you refresh your screen, Clinton seems to lose more ground in the polls. Every day! It’s been like that pretty much all week. It’s been like that ever since James Comey injected his letter into the 2016 presidential race.

However, it’s still Clinton’s to lose. That’s simply electoral college math. That doesn’t mean you should break out the balloons now (or the kleenex if you support Donald Trump). She could lose.

If you’re a Trump supporter, take heart in the fact that he does have pathways to victory – several of them. Here are 7 ways that Trump could win on Tuesday.

To be sure, there are reasons for Hillary supporters to be nervous. There are some signs in early voting tallies, for example, that African-American turnout is down. There are also signs that Latino voting turn out is up, though. The polls have been tightening, turning multiple battleground states into a virtual tie. In others, Clinton’s lead has been shrinking.

However, there’s a reason that forecasting sites that use statistical and polling models to predict the presidency are still overwhelmingly favoring Clinton. That’s because, even accounting for all of the recent tightening in the polls, Trump’s route to the White House is narrower, leaving less margin for error for the mogul from New York.

First, let’s take a look at where RealClearPolitics’ polling averages are at in the battleground states as of November 5:

States that are virtual ties (Someone leads by 3% or less, which is in the margin of error for most polls): Florida, Pennsylvania, New Hampshire, North Carolina, Iowa, Colorado, and Nevada.

States Clinton leads in single digits: Michigan, Wisconsin, Maine (but one Congressional district is tied – we will get to that in a minute), and Virginia.

Here are seven ways that Clinton can win the White House:

Game, set, match. If Hillary Clinton wins Florida, there is almost no way for Trump to win the presidency. Notice we said “almost.” That’s because there is a way, but it would require him to pull off a couple of big upsets (like Colorado and Pennsylvania) while sweeping all of the other states where there is currently a tie or virtual tie.

She wins Florida, his path to victory becomes much, much harder. Take a look at the map above. Florida puts Clinton over the top, and the map is very charitable to Trump because it gives him states that would be considered upsets (but not impossible for him to win): Pennsylvania, North Carolina, New Hampshire, and Nevada, as well as a bunch of states where the polls are tight (like Ohio and Iowa). Florida is a big insurance policy for Clinton against other losses.

Will Hillary win Florida? That’s unknown. The polls there are deadlocked, but Clinton has edged ahead slightly recently, while still being in the margin of error. She is ahead in the RealClearPolitics polling average by 1.2%. As a result, it’s not unrealistic at all to think Clinton could win Florida.

The last two polls had Clinton up in Florida by 4 and 3 percentage points.

Early voting tallies out of Florida do show some positive news for the GOP, though, as more Republicans have early voted slightly, but more Democrats cast early votes in 2008 and 2012. There has been a spike in Latino turnout, though, that likely benefits Clinton.

There are many combinations Clinton can use to get to 270. Let’s take an unusual one. Let’s imagine that Trump has a great election day, and outperforms in various battleground states, but independent Evan McMullin shocks in Utah. After all, that’s the hope of some GOP schemers who still can’t stand Trump and want McMullin to be the spoiler.

The theory goes: Mormons in conservative Utah, especially, have never warmed up to Trump, with his New York excesses and sexual assault allegations. It’s the state of Mitt Romney, who is a never Trumper. McMullin is from Utah, and he’s Mormon. He’s conservative.

Some polls were showing strength for McMullin. However, don’t bet your bank account on this scenario just yet. People were talking about the McMullin thing more a few days ago, because Trump seems to have rebounded there now. He’s ahead an average 10.4% in the RealClearPolitics polling average. However, the most recent poll showed Trump only up 5. So you never know. 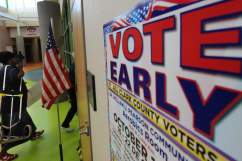 How big of a deal is North Carolina? As with Florida, it’s an insurance policy for Clinton. Look at the map above. Trump could pull off two huge victories on election night, and win both Florida and Pennsylvania, and he would still lose if Clinton wins North Carolina. Or you can give her Pennsylvania, and give him Nevada, since he’s been polling well there (but early voting analysis has found she is in a position of strength to win Nevada).

The race in North Carolina is a dead heat. Trump is ahead 0.8% and he’s up in the last two polls by 7 and 2. African-American turnout is down in early voting as early voting locales were cut back. But Clinton was ahead in North Carolina – a Romney state – until a few days ago, although the state has been tight for months. She led the entire month of October in polling averages.

According to CNN, voting rights advocates have sued, “alleging that at least three counties have purged their voter rolls of a disproportionate number of African-American voters.”

Let’s go back to that Nevada thing. A local television reporter, Jon Ralston, has been analyzing early voting returns there and has found that patterns project a Clinton victory unless she doesn’t hold her base, and Trump clobbers her with independents but holds his.

How certain is Ralston of a Clinton victory after rummaging through all of the early voting data in a state where almost 70% of the electorate early votes? This is what he wrote on November 5, “…the Republicans almost certainly lost Nevada on Friday. Trump’s path was nearly impossible, as I have been telling you, before what happened in Clark County on Friday.” What happened was strong Democratic and Latino turnout.

Ralston noted, “The Dems now have a firewall — approaching 73,000 ballots — greater than 2012 when Barack Obama won the state by nearly 7 points.”

Trump is leading in two of three recent Nevada polls by fairly comfortable margins – 6 and 4 – but the latest is tied. He’s up by 2 in the RealClearPolitics polling average. However, more Nevadans early vote than in some other states (like Michigan and Pennsylvania, which limit early voting).

If Clinton wins Nevada, she can win despite losing New Hampshire, Maine’s Second Congressional District, and North Carolina, all states and a district she has a strong chance in. (Maine gives some of its delegates out by Congressional districts and some statewide.)

Clinton has been surprisingly competitive in normally red Arizona. How Republican is Arizona? It hasn’t elected a Democrat other than Bill Clinton since 1952, and that was by a small margin. It’s a big deal that Clinton has put it in play.

Changing demographics are helping Clinton in Arizona, as the state has a strong Latino population (the same is true of Nevada). If Clinton wins Arizona, she can even afford to lose Florida, Pennsylvania, and North Carolina.

Trump is up 4% in recent polling averages, though. The race was tighter until recent days, when he’s led by 4-5 points in recent polls.

If Clinton wins, this may be the last time you see a Republican candidate trying to run without Latinos. It’s not Reagan’s America anymore.

According to CBS News, Trump has a lead with Georgia independents, but a “whopping 89 percent of black voters in the state support Clinton compared to only 5 percent for Trump.”

Thus, she could theoretically pull off an upset in Georgia, although Trump is leading in the polls. As with Arizona, Georgia could allow Clinton to lose some other big states that she has a strong chance to win. She could even lose New Hampshire, Pennsylvania, Florida, and North Carolina if she wins Georgia.

Trump does lead Georgia by an average of 4.6 percentage points. However, the race was in the margin of error in 2 of the last 3 polls (Trump led by 2, 4, and 1).

7. Clinton Wins Everywhere She is Winning in the Polls

No reason to get so fancy.

The result: A major Clinton victory (although you can see the importance of Florida here, too…. Back to #1).

Loading more stories
wpDiscuz
2
0
Would love your thoughts, please comment.x
()
x
| Reply
Latest 2016 presidential polls are causing some nerves for Hillary Clinton supporters as they tighten more for Donald Trump. However, she's still in the strongest position. Here are 7 ways that Hillary wins.