Pennsylvania has taken on new importance as the epicenter of Donald Trump’s hopes for a big upset on election night.

The electoral math is such that he needs to flip a state where Hillary Clinton has led fairly comfortably in recent weeks but that is tightening now. Colorado or Michigan would fit that bill too. But Pennsylvania, with its 20 electoral votes, would be the big prize that could really shift the dynamic. In September, The New York Times wrote, “The entire race could boil down to Pennsylvania,” adding that very few election scenarios would allow Clinton (or Trump) to lose Pennsylvania and win the White House. That’s still true.

How likely is it that Trump will win Pennsylvania?

Polling trends there are enough to give Democrats heartburn right now. That’s because the three most recent polls in the state, taken since October 31, show that the race is virtually tied:

Those margins are in the margin of error.

Consider this as a potential October surprise: The government revealed Obamacare premiums will go up dramatically in 2017, although it says tax credits will offset that for most people. Still, the news of double-digit increases hit the airwaves October 24. And Pennsylvania was near the top:

To see how important Pennsylvania could be, here’s a scenario where Trump wins Pennsylvania and the White House. It even allows him to lose two other states where he is currently leading slightly in the polls: Nevada and New Hampshire. He could even lose Maine’s Second Congressional District (where electoral votes are apportioned.) What he can’t do, though, is lose Florida or North Carolina (unless he were to pick up some other surprise state, like Colorado or Virginia, where he trails in polls, but it’s getting closer).

The above would still not be easy math for Trump. He’d have to win a series of states that are very tight in the polls right now, especially North Carolina, Florida, and Ohio. Clinton has held her own in Arizona and Georgia, too. (Without a surprise pickup like Colorado or Michigan, the math doesn’t work if Trump loses North Carolina or Florida, underscoring the importance of those states, where the race right now is a virtual tie).

Two other polls that captured the time frame entirely after FBI Director James Comey sent his letter to Congress on Clinton’s emails found her leading by 4 and 2 in Pennsylvania. That means four of the last five polls in Pennsylvania show the race in the margin of error.

No wonder both campaigns have been aggressively campaigning in Pennsylvania lately. Trump appeared in Hershey, Pennsylvania for a rally on November 4. Clinton appeared at a rally in Pittsburgh. 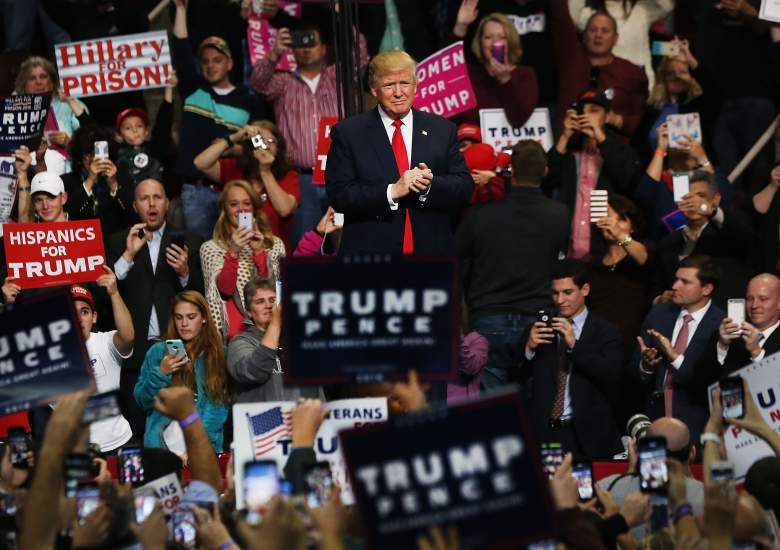 Donald Trump walks onto the stage at a rally on November 4, 2016 in Hershey, Pennsylvania. (Getty)

It would certainly be an upset if Trump wins Pennsylvania, though (and it’s far from a sure thing. After all, he hasn’t broken into a lead there yet.)

Pennsylvania last voted for a Republican president in 1988. Obama won the state 52% to 46.6%, which was about where Clinton’s lead was – until the past few days. National Review wrote in July that Republicans have been trying to break the Pennsylvania code for years now and have only come close: “In the last six presidential elections, Pennsylvania has been close. But it has always broken for the Democrats.”

However, National Review, in an exhaustive analysis of past Pennsylvania presidential election trends, found that “Donald Trump’s deficit in Pennsylvania against Hillary is the smallest of any Republican candidate since 2000.”

Why is Pennsylvania fertile turf for Trump? National Review gave these reasons, among others: Democratic voter registration has dropped; Pittsburgh was turning red; there are a lot of white voters without college degrees in what is sometimes dubbed “Biden Land.”

Pete Seville holds a Donald Trump flag near the venue where the Republican Presidential nominee holds an event at the Eisenhower Hotel and Conference Center October 22, 2016 in Gettysburg, Pennsylvania. (Getty)

In July, former Governor Ed Rendell, a Democrat, told Politico that Trump’s message on trade and “law-and-order” was appealing to Pennsylvanians and could result in Trump winning the state.

Clinton still leads in the RealClearPolitics polling average for Pennsylvania by 2.6%, but that’s dropped in recent days. How much?

She led by an average of 4.9% on November 2. She led 8.6% on October 9, according to RealClearPolitics. She led by 10% on August 25. The race has tightened before. It was a virtual tie in late July after the Republican National Convention and again in late September after Clinton’s health episode at the September 11 memorial. Her lead then widened again after the Billy Bush tape and sexual misconduct allegations against Trump, but it’s narrowing once again with just a few days to go before the election. White women are coming back to him, one poll discovered.

There are several things working in Trump’s favor right now in Pennsylvania (on top of FBI Director Comey’s surprise letter to Congress about Clinton’s emails, which upended the race):

Pennsylvania does not allow robust or in-person early voting, but limits it. Only 5% of Pennsylvanians cast early ballots in 2012 as a result. This helps Trump because his standing in the polls has shifted significantly in the past week.

Democratic presidential nominee Hillary Clinton walks through Heinz Field after a campaign rally at The Great Hall at Heinz Field on November 4, 2016 in Pittsburgh, Pennsylvania. (Getty)

Pennsylvanians who have cast absentee ballots can change them, something Trump has implored them to do. However, it’s not clear if many people are doing so.

Pennsylvania has one of the highest rates of Obamacare premium increases in the country, news the Obama administration revealed just October 24.

The demographics of Pennsylvania help Trump, as the state is almost 83% white and only 28% of Pennsylvanians have a college degree. Trump has appealed to white, non-college educated voters.

What do the most recent three polls say voters are thinking?

The Harper poll (identified as leaning Republican by RealClearPolitics) found that most Pennsylvania voters have a “bleak” view of the direction the country is going in. According to the pollsters, “Trump has expanded his advantage with men (43-49%, 9/22: 42-44%). Independents prefer Trump (26-46%) but self-identified Moderates choose Clinton (57-31%).” Clinton was holding steady with her lead with women.

The pollsters found the shift had occurred in one region in Pennsylvania, identified as “Pittsburgh/Southwest.” The poll found more Trump voters were likely to express enthusiasm about the race and define themselves as being part of a “movement” but that most voters overall felt Clinton would win.

The Susquehanna poll says that voters placed jobs and the economy as their top issue of concern. Most people had unfavorable opinions of both candidates.

The Gravis poll did not provide much insight into voters’ opinions.

As for the two polls before those, the Monmouth poll (which had Clinton with the outlier 4% lead among the recent polls) found that Clinton’s support had dropped 6 percentage points nontheless since the last such poll in October. The pollster wrote, “Clinton is still in the lead, but the race has tightened in the past four weeks. It looks like this shift was in the works even before Friday’s FBI bombshell, which has made only a small contribution to this overall narrowing.”

Only 4 percent of those polled said they might change their vote because of the Comey letter. More importantly, the poll found: “The Republican nominee has regained some support among white voters, mainly among women, since October.” The poll also found that Trump had made “significant gains” in the western part of the state. The poll found that Clinton’s favorable rating had dropped slightly, while Trump’s was up slightly.

Finally, there was the Remington poll. It did not provide additional insight into the data.

This helps Trump because early voting is not as robust in Pennsylvania; thus more people are voting after polls have tightened there in his favor. In 2012, only 5% of the state cast absentee ballots. (Compare that to a state like Nevada, where 69% of the electorate early votes). Michigan and New Hampshire also do not have wide open early voting and do not have in-person early voting. These are all places that Trump has targeted aggressively as the election winds to a close. 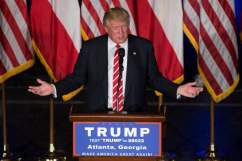