Donald Trump led a massive rally today in Concord, North Carolina at Cabarrus Arena. The rally started at 4 p.m. and police estimated that 3,000 to 4,000 attended. However, the press who travel with Trump got stuck in traffic and arrived about 15 minutes late to the rally, Politico reported, and thus weren't able to get as much coverage as they sometimes do. Click through the gallery to see photos and stories from the rally and learn more about what happened. (Getty) 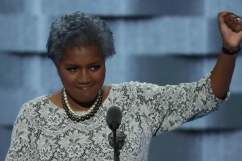