Republican presidential nominee Donald Trump will hold a rally in Jacksonville, Florida this afternoon, his fourth event in the state this week.

Trump will speak from the Jacksonville Equestrian Center beginning at 12:00 p.m. Eastern Time. The event can be viewed live in the embedded YouTube player via Right Side Broadcasting.

Trump has been spending quite a bit of time in Florida this week, having previously held rallies in Miami, Orlando and Pensacola. Hillary Clinton, too, has been paying visits to the Sunshine State, as this is really the most important state in the 2016 election. Without Florida’s 29 electoral votes, Donald Trump will have no way of getting over the 270 he needs to become president.

At the moment, Trump has a very slight lead in Florida’s polls, ahead of Hillary Clinton by just 0.6 points in Real Clear Politics’ polling average. He regained some momentum following the news that the FBI would be looking into emails that may or may not be relevant to their investigation of Hillary Clinton’s private email server, but the most recent two polls out of Florida have Clinton up one and two points respectively.

Unless Trump adds more events to his schedule, this appears to be the Republican candidate’s final rally in Florida before Election Day. His schedule currently goes all the way up until his victory party on November 8th, and his final stops will be in North Carolina, Ohio, Pennsylvania and New Hampshire, with his very last rally being held on Monday night in Manchester.

Following Trump’s rally in Jacksonville, his wife, Melania Trump, will be holding her own event in Pennsylvania. That speech will begin at 2:00 p.m. Eastern Time. 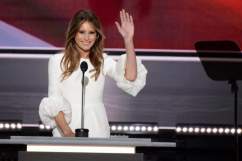 Read More
2016 Presidential Election, Donald Trump, Politics
Discuss on Facebook
Donald Trump will hold a rally in Jacksonville, Florida this afternoon, his fourth event in the state this week. Watch it live here.