Turnout in Florida appears to be shattering 2012 numbers in Democratic strongholds, with several hours to go before the polls close, according to a veteran pollster and reporter who have been crunching the data.

Keep this in mind when assessing Florida turnout data:

Dupree is a reporter for Cox Radio, covering Congress, DC and the elections for WSB Atlanta, WDBO Orlando, WOKV Jacksonville, WHIO Dayton & KRMG Tulsa. On Twitter, he said he is also finding higher turnout in some GOP areas than 2012 too.

Turnout in Martin County, Florida already above 2012; it went for Romney 61-38% pic.twitter.com/hpQtAVBB1A

But he – and the pollster, Tom Bonier – are finding a lot of good news for Democrats.

The key will be not only whether there is high turnout in Democratic bastions at a pace higher than Barack Obama’s tallies in 2012 but also whether turnout is also escalating in Republican areas of the state, and to what degree. Thus, there should be some caution in interpreting partial results.

Remember that Barack Obama won Florida by the slimmest of margins: 0.9%. Everyone remembers Bush vs. Gore: Florida has been a nail biter for years now.

It’s a must-win state for Donald Trump. Florida matters to Hillary Clinton too, but she has more plausible pathways to the presidency even without Florida than Trump has; Trump would have to flip some traditionally blue states to recover from losing Florida, with its 29 electoral votes. Read about the 5 states to watch most closely tonight; top of the list is Florida: 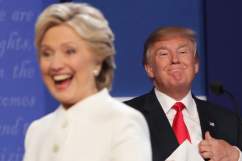 Clinton vs. Trump: The 5 States to Watch Tonight Most Closely

Tom Bonier, CEO of the polling firm, TargetSmart, is one of those crunching the Florida turnout data. As of 4 p.m. on Election Day Eastern Standard Time, here’s what he’s found:

Here's a chart with all of the counties I've looked at so far: pic.twitter.com/eJYqIajTu5

Okay, wow – I've found 9 counties in Florida that are reporting turnout data in real time (or every 10 mins). Analysis to follow…

Extending out to poll close, this would mean Broward would see 133k more votes cast than '12. Of course, turnout will fluctuate.

Turnout in Okaloosa County, Florida with a GOP edge, but like Leon, turnout not yet at 2012 pic.twitter.com/TLIOopSkfT

Clay County, Florida, which went big for Romney, is also above 2012 turnout pic.twitter.com/ZI3AWgdvMu

VoteCastr is a pioneering election project that attempts to predict real-time turnout. It is currently predicting, as of 4 p.m. Eastern Standard Time, that Clinton’s turnout in Florida has surpassed Barack Obama’s in 2012, and that Trump’s turnout is under Mitt Romney’s pacing. One caveat: The site is predicting the same finding in all of the states it’s projecting.

The New York Times says that Hispanic turnout surged in Florida in early voting by 3 percent, making up 15% of the early vote in 2016 and 12% of the electorate in 2012. This could end up critical.

According to The Huffington Post, overall, of early voting tallies before election day: “Slightly more registered Democrats than Republicans have voted in Florida thus far, but Democrats’ advantage is lower than it was at this point in 2012 ― and historically, more Republicans vote on Election Day in Florida.”

However, Florida’s early voting tallies showed surges in Democratic strongholds, the site said. Furthermore, the election will also depend on how independents broke, and The Huffington Post said a bigger portion of Florida independents is now non-white.

Loading more stories
wpDiscuz
1
0
Would love your thoughts, please comment.x
()
x
| Reply
Florida election results show promising signs for Hillary Clinton as turnout is reportedly higher in Democratic strongholds than it was in 2012.