George Matis Jr., a 21-year-old volunteer firefighter in Republic, Pennsylvania, is accused of fatally shooting a 16-year-old junior firefighter at the station. (Facebook)

A 21-year-old volunteer firefighter has been arrested after police say he fatally shot a 16-year-old junior firefighter inside the Pennsylvania fire company’s station Sunday afternoon.

George Matis Jr. was arrested at the Republic fire house on a criminal homicide charge, the Uniontown Herald-Standard reports.

The victim, a sophomore at Brownsville High School, has not yet been identified.

1. The 16-Year-Old Victim Was Shot in the Face & Died at the Firehouse

The 16-year-old junior firefighter was shot in the face and died at the firehouse, state police told WPXI-TV.

The Redstone Township Police Department responded to the scene about 4 p.m. Few details about the circumstances that led to the shooting have been released.

According to the criminal complaint obtained by KDKA-TV, George Matis Jr. was in the fire station’s business office when Matis took out a pistol from his holster.

He “caused the pistol to discharge a bullet” at the teen, striking him in the left cheek, KDKA reports.

2. The Town’s Light Up Night Celebration Was Canceled After the Shooting

The shooting happened just hours before the scheduled Light Up Night celebration in Republic, which includes a parade put on by the fire company. It was canceled after the shooting, the department said on Facebook.

Firefighters were at the station preparing for the parade.

Republic is a community of about 1,300 people in Redstone Township. It is located about 45 miles south of Pittsburgh.

Residents gathered at the firehouse after the shooting, WPXI-TV reports.

“(You) just can’t take any day for granted… . (You) could be gone like that, you know?” Nellree Burnham, who lives nearby, told the news station. “Our thoughts and prayers are certainly with this family.”

The teen, who has not been identified, was a student in the Brownsville School District.

“We are saddened to hear of the loss of one of our students. Our sympathies and support go out to the family,” Superintendent Philip Savini said in a statement. “The district has scheduled counselors who are prepared to offer support to staff and students when school resumes Tuesday.”

3. Matis Jr. Is a Captain With the Volunteer Department & an EMT With Fayette County EMS

Matis Jr. is a captain in the Republic Volunteer Fire Company, according to its Facebook page.

He lives in Republic, according to his Facebook page.

George Matis Jr., third from left, with other members of the Republic Volunteer Fire Company. (Facebook)

Matis Jr. also works as an EMT with the Fayette County Emergency Medical Services, he says on Facebook. He previously worked for Brownsville EMS.

4. His Father Is Also a Volunteer Firefighter in Republic

Matis is the son of another Republic Fire Company volunteer, George Matis Sr.

His father is the secretary of the volunteer department, according to its Facebook page.

He is also the treasurer for the department, according to an article in the Herald Standard about recent legislation impacting volunteer firefighters.

5. He Was Arraigned & Taken to the Fayette County Jail Pending a Preliminary Hearing, Police Said

He was arrested by the Pennsylvania State Police and charged with criminal homicide and reckless endangerment.

It is not clear if Matis has hired an attorney. 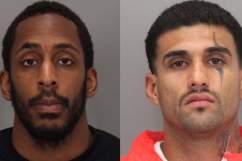