Nate Silver, the noted polling analyst and statistician, said Monday that on a scale of one to 10, Democrats should panic about the possible results of the presidential election at a level of “five or six.” That would be a high degree of panic — but according to Moody’ Analytics, a financial firm whose presidential prediction model has never missed the mark, Democrats should not panic at all.

Moody’s is a key player in the United States economy, providing credit ratings that can shape the value of stocks, bonds and other financial instruments. But the wide-ranging research firm also, every four years since 1980, issues a prediction in the presidential election.

The Moody’s prediction is based not on polls, but on economic and historical factors at the national and state levels.

Based this year largely on low gas prices nationwide and healthy favorability ratings for outgoing president Barack Obama, Moody’s issued its prediction on Tuesday — calling a Clinton victory with 322 electoral votes. That’s 52 more than the 270 required to take the presidency.

That leaves Trump with only 206 electoral votes, out the 538 total votes available from the 50 states combined.

The confident Moody’s prediction contrasts with many national polls which have shown the Trump vs. Clinton race growing closer in the final week before the November 8 balloting.

What Moody’s does not factor in are the personal characteristics of specific candidates. The policies or personalities of Trump and Clinton played no role in the Moody’s prediction. Neither did such news events as the series of sexual harassment claims against Trump, or the FBI’s investigation into Clinton’s emails. 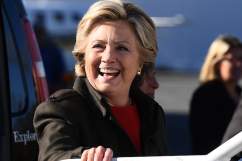 And even a top Moody’s statistician cautions that though the firm’s model has been correct in calling the winner of nine consecutive presidential elections, that doesn’t mean it’s guaranteed to hit a bullseye this time.

“Given the unusual nature of the 2016 election cycle to date, it is very possible that voters will react to changing economic and political conditions differently than they have in past election cycles, placing some risk in the model outcome, particularly state-by-state projections,” analyst Dan White, who authored the Moody’s report, wrote. 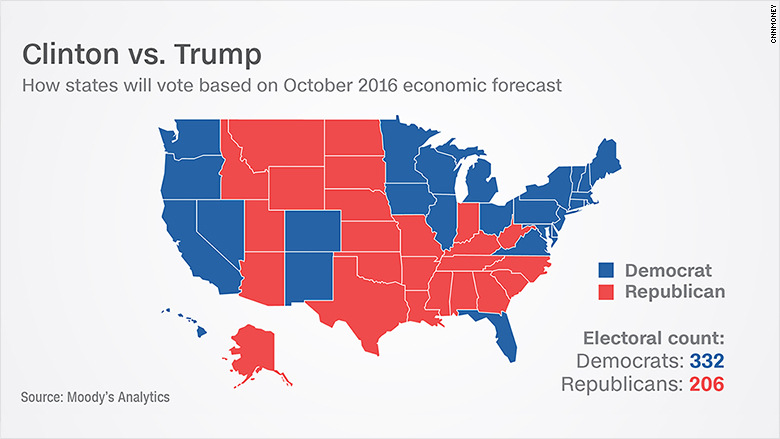 But White also noted that historically, low gas prices combined with a popular president — Obama’s average rating stands at nearly 54 percent positive and trending upward, according to Pollster.com — favors the candidate of the incumbent party, in this case, the Democrats.

“Historically, no incumbent president since Ronald Reagan in 1988 has had a surge anywhere close to [Obama’s] magnitude in their eighth year in office,” White wrote.

At the same time, “Even those who don’t have a car typically pass a gas station and see prices dropping or falling of a daily basis,” the analysts added.

In addition to prices at the gas pump, the Moody’ prediction also factors in two-year household income growth, which has climbed by about two percent, and average values of homes. The value of the average American house has also risen in the past two years.

Politically, in addition to presidential approval ratings, Moody’s also factors in “political fatigue” — meaning the tendency of individual states to switch party preferences from election to election — and the degree to which each state leans toward one party or the other in previous elections.

Under the Moody’s Analytics prediction, the crucial “swing” states of Florida, Ohio, Colorado and Pennsylvania will all fall into the Democratic column on November 8, paving the way for a comfortable Clinton victory over Trump.