Hillary Clinton made a surprise appearance at the UNICEF Snowflake Ball in New York City on Tuesday night to present Katy Perry with an award.

At the ceremony, Clinton presented Perry with the Audrey Hepburn Humanitarian Award, which recognized the singer and songwriter for her years of work with UNICEF. In a short speech, the former presidential nominee commended the organization on the work it does.

“For 70 years, UNICEF has protected children’s rights, helped provide food, safety, medical care, education, and created opportunities for tens of millions of boys and girls around the world,” Clinton said.

Clinton’s appearance was not previously announced and came as a shock to those in attendance, particularly to Katy Perry herself, who was brought to tears by Clinton’s introduction, according to Ashley Lee of The Hollywood Reporter. Perry and Clinton shared a hug when Perry came on stage.

This moment with @HillaryClinton and @katyperry hugging OMG IM IN TEARS ??? #UnicefSnowflake pic.twitter.com/RcdUfBU8FJ

In her acceptance speech, Perry said that Hillary Clinton has “lit a voice inside of me, and that light will never go out. It will continue to get brighter and brighter.” Perry went on to thank Hillary Clinton for everything she has done, and her praise for Clinton was met with cheers from those in attendance.

“Thank you, Hillary. You motivate me and so many millions of people,” Perry said. “We appreciate you, your incredible work, your heart.”

UNICEF named Katy Perry a goodwill ambassador in 2013, and since then, Perry has traveled to poor regions around the world, such as in Madagascar and Vietnam, in order to help children. In 2013, she participated in a UNICEF PSA to celebrate the International Day of the Child Girl, using her song “Roar” in the video.

“Through her continued work with UNICEF, Perry is a tireless champion for children, working to improve the lives of children and adolescents around the world,” UNICEF said on its website.

Katy Perry was a passionate Hillary Clinton supporter during the 2016 campaign, headlining a concert for the Democratic nominee in Philadelphia prior to Election Day. Perry arrived at that event wearing a cape with “I’m with Madame President” written on it.

This is the second public appearance Hillary Clinton has made since losing the presidential election to Donald Trump on November 8th. The first was at an event organized by the Children’s Defense Fund on November 16th. Clinton was already scheduled to speak there prior to Election Day, and she said in her speech that it was very difficult for her to honor the commitment.

“I will admit, coming here tonight wasn’t the easiest thing for me,” Clinton said. “There have been a few times this past week where all I wanted to do was curl up with a good book and our dogs and never leave the house again.” 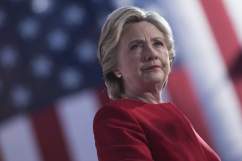