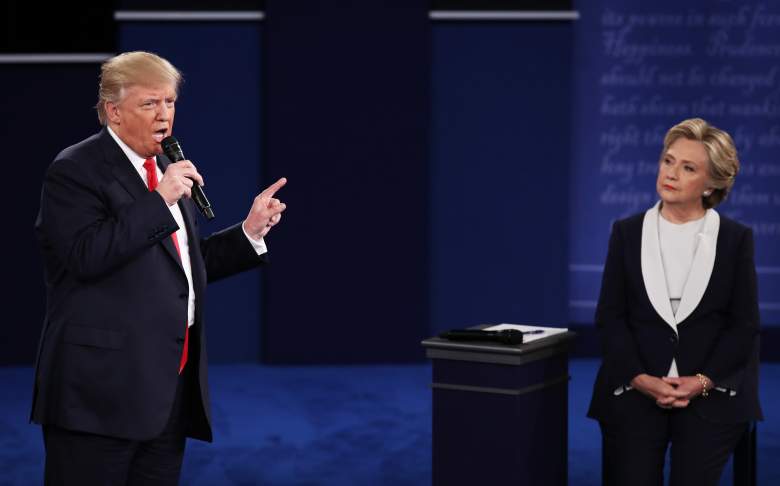 The reason for this is that the Trump campaign is hoping to find a state that’s leaning blue and turn it red in order to take him over the 270 Electoral College votes necessary to become president. If Trump wins all of the states currently leaning red and he picks up every battleground state, i.e. Florida, North Carolina, Ohio, Iowa, Arizona and Nevada, that would only put him at 265 electoral votes.

From there, Trump has a few options to push him over 270. He could win a combination of New Hampshire and Maine’s second congressional district, which explains why his very last rally will take place on Monday night in Manchester; he could win Wisconsin; he could win Michigan; he could win Virginia; or he could win Pennsylvania. The Trump campaign is exploring all of these possibilities, having held events in each of these states throughout October.

Scoring Pennsylvania, though, would be Trump’s best option. The state is worth 20 Electoral College votes, and so winning it gives him room to lose a battleground state like Nevada or North Carolina but still win the election. Meanwhile, the Hillary Clinton campaign has been going on defense in Pennsylvania, hoping to hold on to their lead in the polls and maintain enthusiasm in a state where there is no early voting. On Friday, November 3rd, Hillary Clinton will speak to voters in Pittsburgh, and on Monday, Clinton holds a rally with Bill Clinton, Chelsea Clinton, Barack Obama and Michelle Obama.

It’s still unlikely that Trump will be able to win Pennsylvania. FiveThirtyEight, a website that attempts to predict the results of the election, forecasts that Clinton has a 76.3 percent chance of winning Pennsylvania. And they’re a little more charitable towards Trump than some other forecasters like The New York Times’ The Upshot, which has Clinton at a 92 percent chance of victory in the state. In recent days, after a bad week of news for the Democrats, Pennsylvania polls have tightened slightly, although Clinton still leads Trump in every major survey.

Real Clear Politics’ polling average currently has Hillary Clinton ahead of Donald Trump by 3.8 percentage points. This is the exact same margin that Barack Obama was leading by heading into the 2012 election, and he ended up winning the state over Mitt Romney by 3.9 points.

Here are some of the most recent polls from Pennsylvania.

In the latest Susquehanna poll, Hillary Clinton maintains a lead over Donald Trump, although it is a narrower lead than she has had in recent months and it is within the margin of error. The poll was conducted on October 31st and November 1st by speaking to 681 likely voters. The margin of error is 3.8 percentage points.

When asked what is the most important issue facing the country today, a plurality of voters – 25 percent – chose the economy, followed by health care and education, making government more accountable and responsible, and terrorism. Although one of Trump’s key issues is illegal immigration, only five percent of those polled said this is the most important issue facing America.

The latest from Monmouth gives Clinton a bigger lead over Trump, although once again it’s within the margin of error. The poll was conducted from October 29th through November 1st by speaking to 403 likely voters. The margin of error is 4.9 percentage points.

Three percent of voters selected Gary Johnson, while another one percent chose Jill Stein. When this poll was previously conducted from September 30th through October 3rd, Clinton had a 10 point head.

Although one might initially blame this tightening in the polls on the recent revelation that the FBI is looking into emails that may or may not be relevant to their investigation into Hillary Clinton’s private server, only four percent of those polled by Monmouth said that this made any difference on who they’re going to vote for. Eighty-nine percent said the news had no impact on their decision, and six percent hadn’t heard of the news.

Trump has regained a bit of support from white women since early October, a time when over a dozen women gradually came forward to accuse the Republican candidate of sexual assault. In the previous poll, white women favored Hillary Clinton 55 percent to 35 percent. In this new poll, white women still favor Clinton, but the gap is no longer as wide, with Clinton ahead of Trump 48 percent to 45 percent.

In Quinnipiac’s new poll, Clinton holds a five point lead, even though this poll was conducted in the midst of the FBI investigation announcement and after the news that Obamacare premiums will rise next year. The poll was conducted by speaking to 612 likely voters from October 27th through November 1st. The margin of error is 4.0 percentage points.

Three percent of those polled said they would vote for Gary Johnson, while another three percent said they’d vote for Jill Stein. In a head to head matchup, Hillary Clinton wins 50 percent to 44 percent.

The latest CNN/ORC poll has Clinton once again four points ahead of Trump in Pennsylvania. The poll was conducted by speaking to 799 likely voters from October 27th through November 1st. The margin of error is 3.5 percentage points.

Four percent of those polled chose Gary Johnson, two percent chose Jill Stein, and one percent chose none of the candidates. In a head to head matchup, Clinton leads Trump by five points, 51 percent to 46 percent.

Loading more stories
wpDiscuz
0
0
Would love your thoughts, please comment.x
()
x
| Reply
As Donald Trump targets Pennsylvania in the final week of the election, Hillary Clinton is still favored to win the state, but her lead is now more narrow.