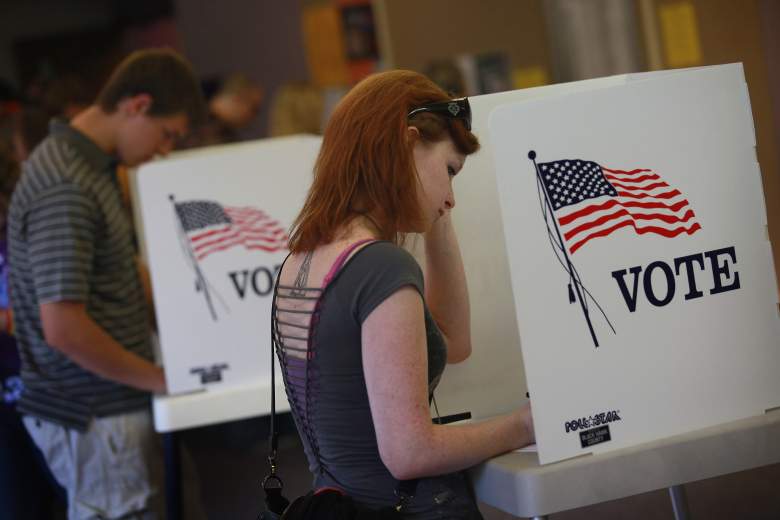 Students vote on the campus of the University of Northern Iowa in Cedar Falls during the 2012 election. (Getty)

As of November 3rd, about 535,000 Iowans have cast their ballot early, according to the Iowa Secretary of State’s official report. This means that 25 percent of the state’s entire population of registered voters have participated in the 2016 election thus far. Democrats hold a lead in votes cast, ahead of Republicans by 42,000 ballots. At this time, 228,000 Democrats have voted early compared to 186,000 Republicans.

One might expect this to signal a Hillary Clinton win, but that Democratic lead is significantly smaller than it was in 2012. At this point four years ago, Democrats were ahead of Republicans by 65,000 ballots in Iowa. By the end of early voting that year, 219,000 Republicans had voted compared to 287,000 Democrats. Turnout is actually down in both parties compared to this point in 2012, but it has decreased among Democrats more than it has among Republicans.

This is good news for Donald Trump because Democrats often build up a lead in early voting, only for Republicans to have the advantage on Election Day itself. On Election Day 2012, for example, Republicans beat Democrats in Iowa by 87,000 votes. But Barack Obama’s early voting edge on Mitt Romney was large enough that he was able to overcome this and win the state by a margin of 5.8 percent.

So while Democrats are technically ahead in Iowa right now, their lead has dropped 35 percent since 2012. If Republicans turn out in droves on Election Day, as they typically do, it’s quite possible that Donald Trump will be able to overcome the current 42,000 vote gap and successfully turn the state red.

As a sign that Iowa Republicans seem to be more motivated to head to the polls than Iowa Democrats, Republican turnout is way up in the state’s fourth congressional district. This district, which encompasses Sioux City, Ames, Mason City, Fort Dodges, and Boone, is the most conservative in the state, and it is represented by Republican Steve King. In the fourth congressional district, 53,000 votes have been cast by Republicans compared to 42,000 cast by Democrats. By this point in 2012, Democrats in the fourth district had already cast 53,000 votes, 11,000 more than they have this year. Turnout is also down among Republicans in the district, but only by 3,000 votes.

One key group to keep a look out for is unaffiliated voters, 120,000 of whom have voted early in Iowa. That number is once again down from 2016, but these voters still account for 22 percent of all those who have participated in the Iowa 2016 election. Which candidate will they pick? Iowans without a political party generally tend to be split between Donald Trump and Hillary Clinton, although the result varies poll to poll. A recent Quinnipiac survey found that Donald Trump and Hillary Clinton are tied among independents, 40 percent to 40 percent. But a poll from The Des Moines Register had Trump winning the independent vote, ahead of Clinton among them 42 percent to 31 percent.

A Trump victory in Iowa wouldn’t exactly be a monumental achievement as much as it would be something that absolutely must happen in order for Trump to be elected president. His pathway to 270 Electoral College votes is so narrow that he simply can’t afford to lose any battleground state. Even if he wins Florida, North Carolina, Ohio, Nevada, Arizona and Iowa, plus all the states that are firmly in his corner already, he would only be at 265 electoral votes. If he lost Iowa, he’d be back down to 259. At that point, even winning New Hampshire and Maine’s second congressional district wouldn’t save him; he’d have to pick up a big state like Pennsylvania, Michigan or Wisconsin to make up for the Iowa loss, and all signs point towards the fact that all three of those states are firmly in the Clinton camp.